The Roadrunners finished their season-opening three game road trip with a pair of 2-1 wins over the Stockton Heat and the Bakersfield Condors. They are now (2-1-0). 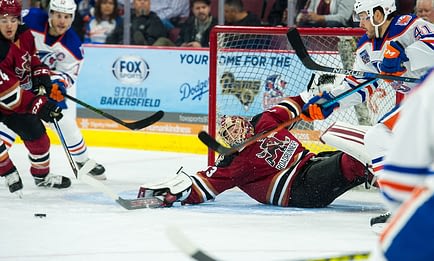 Adin Hill makes a save against the Condors on Saturday Night
Source: tucsonroadrunners.com

The first of the two games was a 2-1 overtime win over the Stockton Heat, the AHL affiliate of the Calgary Flames. In a scoreless first period, the Roadrunners outshot Stockton 9-7 in a strong defensive effort by both teams.

The Heat’s Brandon Bollig broke the tie 8:38 into the second and was assisted by Ryan Lomberg and Colby Robak. Overall, the second period was a poor effort for the Roadrunners. Marek Langhamer had to stand on his head just to keep Tucson in the game as Stockton outshot Tucson 19 to 4 in that period.

The Roadrunners were able to take the momentum away from Stockton in the third period. Craig Cunningham scored his third goal of the season 5:08 into the third, tying the game up. The goal was scored at even strength and he was assisted by Eric Selleck and Kyle Wood. The score remained 1-1 for the rest of the period, sending the game to overtime. Shots in the third period were 16-15 in favor of the Roadrunners.

In overtime Langhamer saved the game, stopping a 2-0 breakaway. Moments later, Brendan Perlini received a beautiful break-out pass from Kyle Wood, skated into the offensive, toe-dragged around a Stockton Defender and finally cut across the slot and sniped Jon Gillies for the win. Ryan MacInnis was credited with the secondary assist, and the goal was scored 3:19 into overtime. Shots were 3-1 Stockton in OT and 44-30 in the game.

The 2-0 breakaway and the game-winner are shown here.

On Saturday, the Roadrunners beat Edmonton Oilers’ affiliate; the Bakersfield Condors 2-1 in regulation. Because he played the night before, Roadrunners head coach Mark Lamb gave Langhamer the night off. He was replaced by Adin Hill, who made his second start of the season, the first being a 5-3 loss to the San Diego Gulls.

Carrying momentum from his thrilling overtime game winner, Brendan Perlini opened the scoring with a powerplay goal 4:51 into the game; the assists came from Kyle Wood and Anthony DeAngelo. The score remained 1-0 for the rest of the period, and Tucson outshot the Condors 10-6.

No one found the back of the net in the second period, and the shots were 10-6 in favor of the Condors.

Nine minutes and 39 seconds into the third period the Condors’ Scott Allen tied the game up (assists: Patrick Russel, David Musil). Despite being outshot 16-9 in the third, Tucson’s Eric Selleck managed to net the decisive goal 14:31 into the period (assists: Dakota Mermis, Mark Olver). Shots at the end of the game were 32-25 Bakersfield.

The outstanding goaltending is a great sign for this team. Both Langhamer and Hill played fantastic games; the Roadrunners wound not have won either game if it wasn’t for them. Hill’s stellar play even earned him a call-up to the Coyotes today.

Also, the play of Brendan Perlini and Kyle Wood was something to be proud of. Perlini’s two goals and Wood’s three assists made both players the heart and soul of the Roadrunner offense over the weekend. Look for their outstanding play to continue, throughout the season.

However, the Roadrunners are still allowing way too many shots against. Tucson has now been outshot in all three of their games this season, and although good goaltending is a great thing to have, you cannot rely on your goalies to steal every game for you. The Roadrunners will need to work on that if they want to win a lot of games this season.

Tucson’s next game is the Roadrunners’ home opener, which will be played this Friday, October 28th against the Stockton Heat.