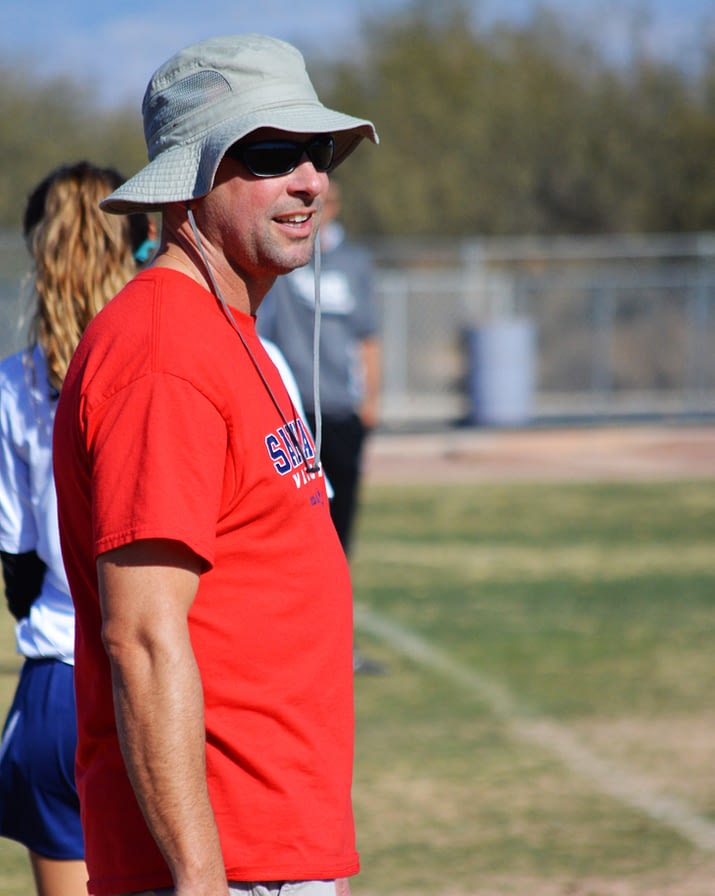 Dave Kruszewski is in his 20th year with Sahuaro (Andy Morales/AllSportsTucson.com)

Top Returners:
SR Brendan Gary – Started for varsity last year as a junior. He will be our best player and I believe one of the best players in town this year. Last year he played the “4” for us, but we are sliding him over to his more natural wing position.
SR Devan Gary – Will play the point this year
SR Jordan Kittrell – Inside post presence and protector of the basket on the defensive end of the floor.

Top Newcomers:
JR Jacob Jansepar – will be a tough guard in the post as his size and post moves have improved dramatically over the last year.
JR Deshawn Engriam – versatile inside and outside player
JR Dylan Newell – Best perimeter shooter

“We are replacing seven seniors from last year’s team and that will prove to be a difficult task. Especially replacing All-Region PG Armando Cardenas. This team has a lot more size than last year’s team and more versatility. If they can adjust to the varsity game and come together as a team, they have the potential to be very competitive. The difficulty of our region and our schedule will prove to be their biggest challenge to returning to the state tournament.”

“This year’s team will be scrappy and quick as we have an undersized roster. Our players are aggressive defensively, so we will look to disrupt offenses through pressure and push the tempo of the game.”

Key Returners:
Dominic Gehr (12) 6’3” guard, exceptional athlete, expected to be a major impact player
Dylan Telford (12) 6’0” undersized post player, who was our most consistent, toughest player last year
Mike Haskins (12) 6’6” small forward who should be a leading scorer and rebounder for us this year

We also have at least 3 sophomores who are making a big positive different in varsity football and may end up being varsity difference makers in basketball, they all had very strong freshmen numbers last year.

Andrew Smith (11) is a transfer from Mountain View who will have to sit the first half of the season, but could be a positive difference maker for us moving forward.

“Marana Basketball did not win a game from 1/10/13 until 11/24/15 when this 62-game losing streak came to an end with an overtime win against Sabino. The 15-16 team consisted of only one senior and we went on to win 10 games over the course of the season for the first time since before 2004-05 when Joe Acker was the head coach at Marana. We believe that the work put in at the lower levels over the past two years and the positive momentum from last year will allow us to be competitive in the conference this year and significantly improve as a team.

We have 11 seniors returning from last year; however, because of the change in the culture of Marana Basketball and the hard work of the younger kids we have nine juniors and three sophomores who we will be looking to make the varsity team, several of whom could become starters this year.

Our biggest concern and greatest strength actually go together. We are very fortunate to have a lot players who are ready to contribute at the varsity level. We will have a very deep team and be able to get quality play throughout our bench.”

“Sahuaro is in a challenging region that we feel we can compete in. We look forward to developing this group and attempt to qualify for our 16th consecutive state playoffs.”