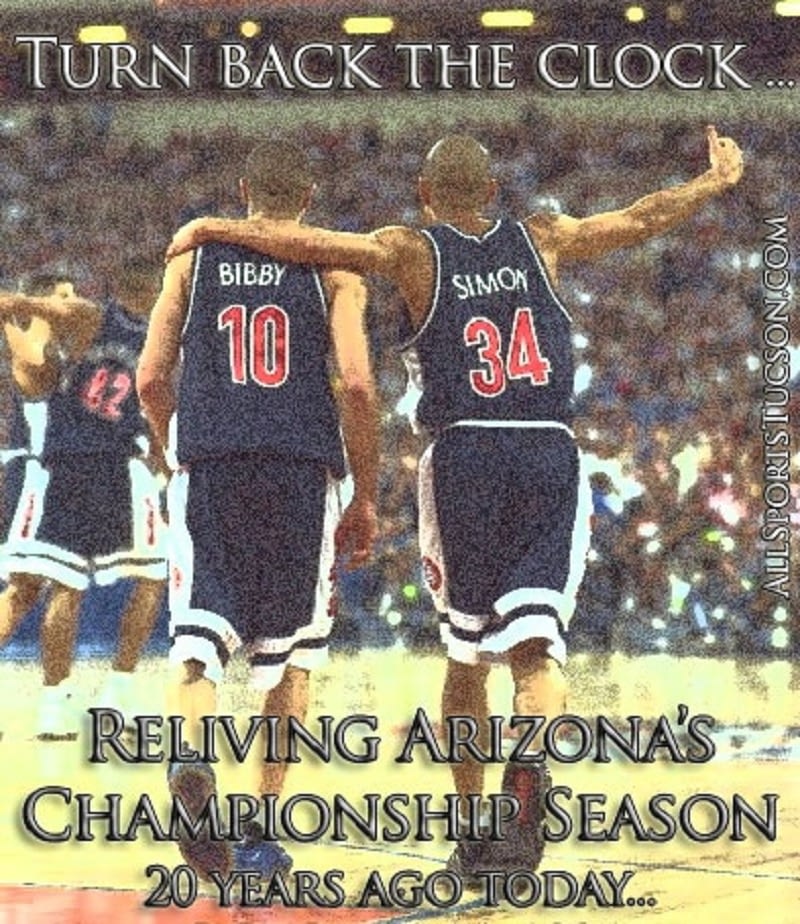 EDITOR NOTE: AllSportsTucson.com will run a feature this basketball season highlighting what happened 20 years ago on that particular day commemorating the 20th anniversary of the Arizona Wildcats’ national championship. The next in the series is what occurred and what was written concerning the developments of Dec. 9, 1996, when Arizona hosted No. 13 Texas. The information gathered is through articles written by beat reporters Steve Rivera (Tucson Citizen) and Javier Morales (Arizona Daily Star), who now are working together for AllSportsTucson.com

For most of the game, Arizona Wildcats scoring machine Michael Dickerson seemed to be matching his points to every Texas turnovers.

Dickerson would eventually post more points, and that was partly because of sloppy play by the Longhorns, who were out of control thanks to the Arizona defense spearheaded by guards Mike Bibby and Jason Terry.

No. 8 Arizona (4-1) used Texas’ haphazard play and the frenzied pace to its advantage in the victory in front of 14,164 fans at McKale Center.

“I owe a lot of what I scored to Jason and Mike,” said Dickerson, who scored 30 points. “They were denying the passing lane, knocking the ball loose and setting up our transition game.

“There’s nothing another team can do when we get going like that.”

Texas had 27 turnovers, after the 13th-ranked Longhorns (4-1) had been averaging 16. The last time the Longhorns had that many turnovers was against Arkansas’ Forty Minutes of Hell defense in the 1991 Southwest Conference tournament.

Bibby’s eight steals set an Arizona record, surpassing the seven held by Russell Brown against Cal-Riverside in 1980, Puntus Wilson against Stanford in 1983 and Reggie Geary against Washington in 1995.

There may not be a swagger and a sass associated with the Arizona basketball team – at least not yet.

But if it continues to handle troubled times and win, followers may start seeing that bravado of years past.

In tonight’s 83-78 non-conference victory against No. 13 Texas, a game played just below the legal speed limit, No. 8 Arizona showed it can take the punches and still roll.

The Wildcats are still vulnerable in areas, but they have enough fortitude to move on.

”That’s a very talented team we beat out there,” Arizona assistant Jessie Evans said. ”We showed our poise, but we’re growing up each game. We’ve got to.”

Arizona has no other choice. But in the gritty, gutsy win over Texas, a game described by color analyst George Raveling as having a Final Four feel, Arizona seemed to be advancing the maturing process a bit.

Apparently. Despite its youth, UA knows all too well about survival skills. As freshman Mike Bibby said, UA players have been there before.

”Every player on this team was the main player on their high school team, so they’re used to that (pressure),” said Bibby, who set a school record for steals with eight and added 14 points and five assists in 39 minutes.