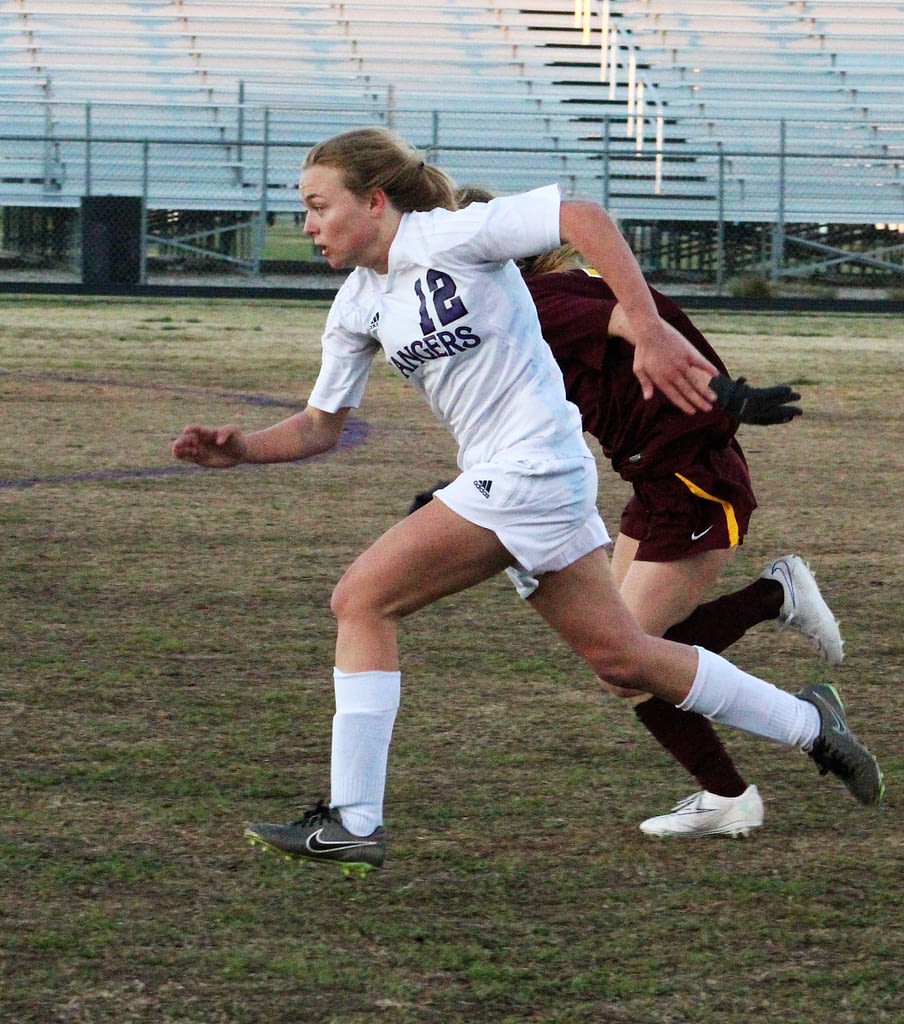 Hannah Leitner got past three defenders and sprinted to the goal to put Rincon/University up 1-0 with less than a minute left in the first half. (Andy Morales/AllSportsTucson.com)

Down 4-3 in PKs, Rincon/University goalie Genny Standifer used a bit of luck and a bit of strategy to avoid elimination in the 6A Play-In bracket Thursday night at the hands of No. 20 Mountain Pointe.

The sophomore blocked two shots in a row and Addison Plummer found the net to give the 13th-seeded Rangers a 2-1 (5-4) victory and a spot in the 16-team bracket to be announced on Friday at 2 p.m.

“It was nerve-racking,” Standifer said. “I told myself I had to do it. Part of it is reading body language and then making a guess. This feels good.”

DESERT VISTA OVER RINCON AT AZPreps365.com

Sophomore forward Hannah Leitner used her speed to take the ball from midfield to the goal to put the Rangers up 1-0 with 43.6 seconds left in the first half. It was a lead that would last until Mountain Pointe standout Alison Turk found the net in the 67th minute, giving the senior 15 goals on the year.

The 1-1 tie lasted through both overtime periods to set up the PK round where Turk put the Pride up 1-0. Standifer came out of the goal and tied things up 1-1 on a low shot to the left but Annika Luecht put the Pride back up 2-1.

The Rangers missed on the next attempt and Lauren Dill put the Pride up 3-1. Leitner found the net to cut the lead down to 3-2 but Raquel Hagar went right to put the Pride up 4-2. Eilise McLaughlin made it 4-3 and Standifer came up with her first block to avoid elimination.

Alia Raderstorf tied it up 4-4 and Standifer blocked another attempt to keep the Rangers alive and Plummer clinched it for the Rangers on her shot.

The AIA Soccer Bracket Show is Friday at 2 p.m. and can be seen at live AZPreps365.com.

Genny Standifer finished with 12 saves including two in the PK round (Andy Morales/AllSportsTucson.com)