Saturday night the Tucson Roadrunners played the second of a two game series against the San Jose Barracuda, losing 4-3 in overtime after losing 4-3 (in regulation) the night before. The loss kept San Jose’s AHL-best 14 game winning streak intact, and gave the Roadrunners a much-needed point in the standings. In goal Adin Hill returned from the Coyotes replacing Marek Langhamer, and for the Barracuda Troy Grosenick received his second consecutive start. 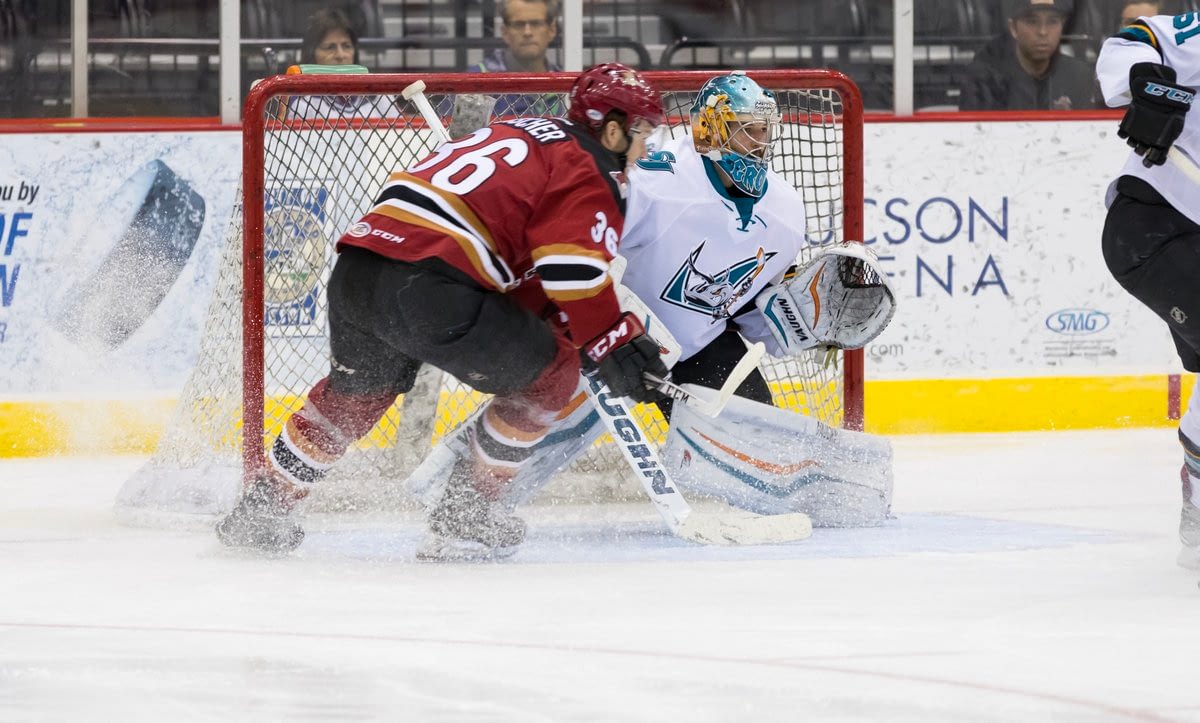 The first period was uneventful with both teams failing to score, and saw an evenly mactched period  in terms of puck possession and quality of play. San Jose’s superior shot blocking was the main factor in the Barracuda’s 11-5 shot advantage.

The second period was one of the most intense and competitive periods played by the Roadrunners all season, again San Jose’s superior shot blocking was the main reason why the Roadrunners were outshot 12-7 in the period. Puck possession was relatively even, both teams were physical and 3 goals were scored. Tucson broke the scoreless tie as Mitch Moroz scored his first as a Roadrunner, sliding the puck just under Grosenick’s pad. San Jose’s Marcus Sorenson would score twice before the period was over, leaving the score after 40 at 2-1 San Jose.

Down one goal in the third, Kyle wood buried a one timer from Chris Mueller and Zbynek Michalek, tying the game. Minutes later, Laurent Dauphin put the Roadrunners up 3-2, scoring his third goal in two games. The score would remain until San Jose’s Nikolai Goldobin tied it up with just 2:04 left to play; sending the game into overtime, where Timo Meier scored the game-winner for the Barracuda.

Look for the Roadrunners to bounce back with a win against the San Diego Gulls at home, this Tuesday February 28th.