TEMPE — For some reason, Arizona has struggled here at Wells Fargo Arena in the Sean Miller era. Three losses in eight games. One would figure what do the Devils have over Miller?

The first half almost made it look like it would be a fourth loss, given Arizona was just up one point and out of sync.

Then the second half came. Arizona showed up, did what it had to to get by the Sun Devils, 73-60, here at Wells Fargo Arena.

“I’ve seen several games with Arizona where they played fairly close with an opponent on the road in the first half and kind of broke the game open and that’s not how we would have liked to start the second half,” said ASU coach Bobby Hurley. “The energy wasn’t as great on defense and we were missing shots, so it was a perfect storm of how not to begin a half”

Arizona can thank senior Kadeem Allen. Arizona started with a 10-0 run to start the half and, well, it was all but over for ASU. Arizona’s haboob was the start of the storm that ASU couldn’t overcome.

Arizona coach Sean Miller said it was a good win in part because it’s been hard here because it’s “an emotional game.” 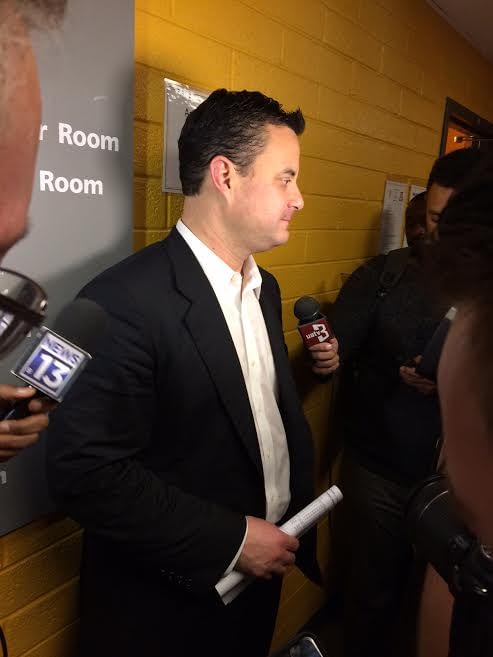 “It was a matter of us being able to defend them,” Miller said.

Round Mound of Rebound

OK, OK, Alkins is no Charles Barkley and he’s hardly a round guy but he plays bigger (6’5″) than he is. Saturday he pulled down 15 rebounds, four more than the next guy. Miller called it remarkable in a game like this. And he said Alkins was one of the team’s MVPs.

Alkins cleaned the glass so well his new nickname should be “Scrubbing Bubbles.” He said he’s looking to get 10 rebounds a night.

“I just do whatever it takes to win,” Alkins said. “Rebounding, especially after UCLA (and getting beat) (was important). That’s something I need to do to stay on the court.”

Said Allonzo Trier: “He did a real good job. He took a few of mine (he laughed) but he did a tremendous job … That’s big time for him. But it wasn’t just him.”

So if Alkins rebounds well, shoots fairly well, defends and plays pretty solidly what does he think he does best?

“My biggest attribute is not being one dimensional,” he said. “Guys usually have that role where he’s a shooter or he’s a defender. I want to be known as an all-around player … a little of everything.”

The Power of Trier

Trier missed Arizona’s first 19 games and it’s taken him some time to get back in the groove. Last week, it appeared Trier was headed in the right direction. He had 25 points and 28 points. On Saturday, he had a game-high 19 points. He went 5 for 14 from the floor but hit 8 of 9 from the free throw line.

How does he feel about his play these days?

“I’m just going in there and playing basketball,” Trier said. “I played it my way whether I was making a pass or shooting. It was good to see some go down. It’s good but I try to go out and play well every night. I’m just going to go out and help my team any way I can.”

“Hopefully it’s not a timing thing … just trying to keep it steady and consistent,” he said.

ASU’s Hurley said Trier is “just another weapon, making them a deeper team, you know.”

Trier did not play vs. ASU in the first meeting because of the PED suspension.

“He’s a guy that can shoot the three (he hit) a big three in the second half,” Hurley said. “He went off a dribble a couple of times, (and got to) the rim”

Do NOT bring that into Lauri Markkanen's house. pic.twitter.com/WmG9ixT7n2

Markkanen’s struggles have been well documented. He struggled again on Saturday at least offensively, going 3 for 10. He went 0 for 5 from the 3-point line. Miller said he’s not concerned given he knows what type of player Markkanen is.

“That’s going to come back around,” Miller said. “What’s really pleasing is his rebounding and shots around the basket (are good). He set the tone for us in the second half.”

Miller talked about the adjustment from FIBA to the NCAA and how he’s becoming more instinctive.

Miller said the “switch went off with him and he started to block shots.” The coaches have talked to him about that more and more.

Markkanen had three blocked shots, two of the ‘where did he come from variety?’

“That was some of the best blocks I’ve ever seen,” said Trier. “He did a great job of changing the game for us and shifting momentum for us in a big way. He changed the way. I’m happy for him.”