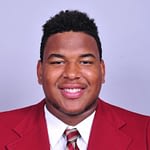 Arizona coach Rich Rodriguez needs to do whatever he can to bolster the Wildcats’ defensive line.

A former four-star recruit who spent two seasons at USC could be part of the answer.

Former USC defensive tackle Noah Jefferson — listed at 6-foot-6 and 315 pounds as a sophomore last season — announced on Twitter on Sunday that he has committed to Arizona.

After talking it over with God and my family I would like to Announce that I have Commited to The University Of Arizona #BearDown pic.twitter.com/xAfzqFgnym

He started the first game of last season against Alabama, making three tackles, but didn’t play again the rest of the season. He suffered an injured shoulder against the Tide, also took some time away from the team because of a reported family issue in Las Vegas and needed to work on his academics, according to comments during the season from USC coach Clay Helton.

It’s unclear whether 2016 could count as a medical redshirt season for Jefferson — although all the other issues make that unlikely — or if he would be eligible in 2017 for Arizona.

He appeared in 14 games as a true freshman in 2015, making one start in the Holiday Bowl against Wisconsin. Jefferson made 23 tackles that season.

Jefferson was ranked as high as No. 52 nationally, according to Rivals.com. He was considered the country’s 263rd-best prospect out of high school in the 247Sports Composite rankings.