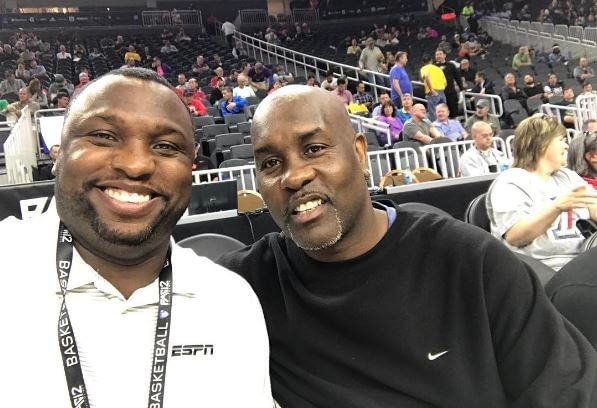 Arizona basketball alum and TV analyst Corey Williams was hanging out on media row Wednesday at the Pac-12 tournament, so we cornered him between night-session games to ask him some questions about the Cats and the rest of the league …

Q: Arizona is going to play Colorado in the quarterfinals. What do you like about the matchup and what would worry you a little bit?

WILLIAMS: “I think Arizona has more weapons than Colorado offensively. If they can play up-tempo, get stops and get out, they can really do some damage. Colorado is a weird team to figure out because they have only shown up three or four times all season. They showed up against Oregon (a 74-65 home victory) and actually played to their potential. This is a game where I think they are going to answer the bell.

“They have solid interior players, and Derrick (White) is just outstanding at the point. I don’t know if Parker Jackson-Cartwright can guard him one-on-one. I mean, Derrick is a big guard (6-foot-5). You have a team that has nothing to lose. Colorado is believing in themselves right now. But, matchup-wise, Arizona has the advantage. Arizona is quick enough and strong enough to get them in foul trouble, and then that changes the game.”

WILLIAMS: “Here’s my take on Lauri Markkanen. Tremendous kid; tremendous talent. One of the better players in the country. But (defenses) found him. They found out who he was. They looked at tape and saw what he was doing. He started doing damage — hitting 3s, pick-and-pops. Teams were losing him. They don’t lose him anymore. If you notice, when the shot goes up, his guy is still staying with him. Coaches are like, someone else has to beat us. No matter what action is going on on the court, that guy stays right in his jersey the whole time.

“Now, can he take it to the second part of his game — get the ball on the move, cut to the basket, post-ups, put-backs. The old days of standing in the corner and the ball coming to you, those days are over. He’s too big of a star now. So, he’s got to adjust. And Sean and the team have to find a different way of getting him the ball.

“He’s starting to use his size again. He’s starting to go for 2s, which has made a huge difference in his game. When he plays to get 2s, he’s unstoppable. But he fell in love with that 3-point line, and then they took it away from him, and everybody is like, ‘He’s in a slump.’ I was like, ‘No, (opposing) coaches decided he needs to start shooting 2s.'”

Q: If it’s Oregon, UCLA or Arizona, should the Pac-12 champion be the No. 1 seed in the West over Gonzaga?

WILLIAMS: “If Oregon comes out as the co-conference champ who runs the table in Vegas, how they don’t move to the 1 line, I don’t understand that. If Oregon wins this tournament, I know and everybody else knows, Oregon is a stronger team than Gonzaga. If they walk out of here holding the trophy, how do you not move then to a 1 spot? If Arizona wins it, I think you can make the argument they should be the 2 seed.”

WILLIAMS: “Arizona would have beaten Gonzaga the first time if they had (Allonzo) Trier. From what I’ve seen, I would think Arizona would be the favorite straight-up vs. Gonzaga now. No question about it. I knew Gonzaga was flawed; BYU exposed it a little. The Zags score but I don’t think they had ever been defended. Arizona can defend Gonzaga. For Arizona, the key is to keep everybody in that 60-point range. They can’t do track meets with UCLA. They can’t do track meets with Oregon.”

Q: Who is cutting down the nets Saturday night?

WILLIAMS: “I am going to say Arizona. Neutral site favors Arizona. The reason it favors Arizona is because UCLA just doesn’t defend that well; I don’t think in a neutral site, they are going to be able to score like they do at home. I think Arizona, if they lock down defensively, they’re the team that can come in and grind out three wins.”