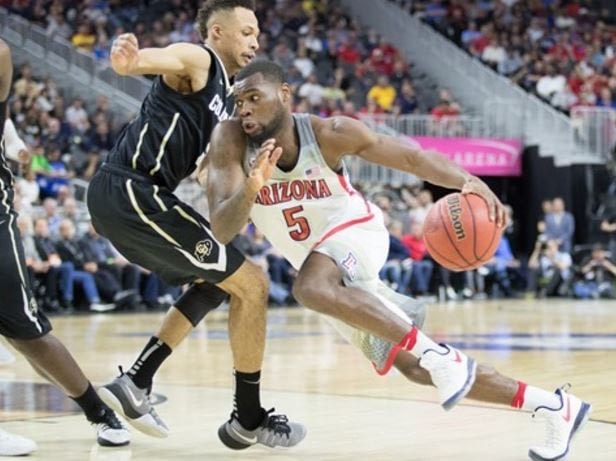 One 3-pointer rattled in. Then another. And another. And, for good measure, one more with 3:20 left that delivered a big Finnish knockout to a stubborn Colorado team that kept staggering back to its feet.

Arizona marched on in the Pac-12 tournament with a 92-78 victory over Colorado on Thursday night, and Markkanen wasn’t the only Wildcat with a hot hand. But he was the one that everybody was getting maybe just a wee bit anxious to see have renewed success from long range.

“A couple of bad games doesn’t define who he is as a shooter,” said Arizona point guard Parker Jackson-Cartwright. “We knew it would take only one to really get things clicking again, and that’s what happened tonight.”

Well, it was more than a couple of bad shooting games for Markkanen, but point taken. The 7-foot freshman broke out of his shooting slump with a team-high 20 points, hitting 4 of 7 3-point shots at T-Mobile Arena.

He entered the postseason having made only 5 of 28 3-point shots in his final eight regular-season games. That came after he was shooting better than 50 percent from 3-point range through 23 games.

He said it was nice to see that first one Thursday night go through the net, although he wants to be known as more than just a shooting specialist.

“I’m trying to make sure I’m not just staying behind the 3-point line,” he said. “I’m trying to be a versatile player, working on every aspect.”

It’s actually been rare that he and guard Allonzo Trier have hit offensive heights in the same game. It happened vs. Colorado. Trier scored 19 as Arizona showed lots of firepower.

The Wildcats shot 55.6 percent from the field (30 of 54) and 52.6 percent (10 of 19) from 3-point range. Dusan Ristic and Rawle Alkins each scored 15. Kadeem Allen chipped in 13. And a special shout-out to point guard Parker Jackson-Cartwright, who had a career-high seven rebounds to go with seven assists and no turnovers in 34 minutes.

“Arizona was just so efficient offensively the whole game,” said Colorado coach Tad Boyle. “We talked about our ball-screen defense at halftime, and they came out and shot 64 percent in the second half.

“I mean, they were offensive juggernauts tonight. My hat goes off to them. They’ve got some good players. They’re well coached. They’ve got great balance inside and out.”

Arizona’s balance more than offset a super game from Colorado guard Derrick White. He poured in 31 points. Forward Xavier Johnson (20 points) was the only other Colorado player to make more than three baskets.

The Cats led by one at halftime but went on an 11-0 run to start the second half. Colorado failed to score for the first 4:24 of the half and missed its first six shots from the field.

Colorado pulled back within 54-47 before back-to-back 3-pointers by Alkins and Markkanen started a 12-4 Arizona run. Breathing room. The Buffs ended up making five 3-pointers in the final 10 minutes, but the Wildcats had enough cushion and too much offense to surrender the lead.

“Let me tell you, they’re a tough out,” UA coach Sean Miller said of Colorado. “It was a good test.”

KO says @APlayersProgram is hitting their stride in March. #Pac12Hoops