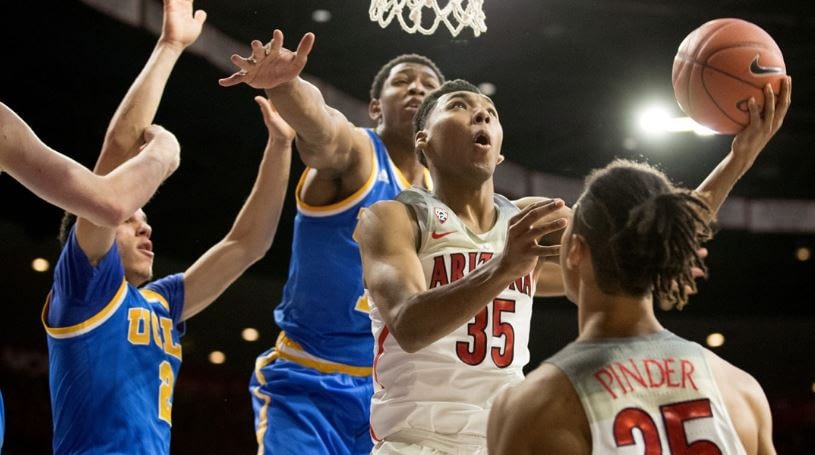 The winner gets to (probably, almost certainly) take on No. 5 Oregon in the championship game Saturday night. And the winner of that gets to:’

1. Be in contention for a No. 1 seed in the NCAA tourney.

2. At least stay in the West as the No. 2 seed behind Gonzaga. Which isn’t a bad way to be.

Arizona won at UCLA. UCLA won at Arizona. So bring on the rubber match at a sold-out and sure-to-be-rockin’ T-Mobile Arena.

Arizona senior guard Kadeem Allen, as he sat in the locker room after a 92-78 victory on Thursday night while UCLA was tipping off against USC, could not hide his excitement about the potential to play the Bruins again.

He said the home loss to UCLA on Feb. 25 stuck with him a little bit longer than most defeats.

“Just because of the night — it was Senior Night,” Allen said. “It was tough how we didn’t really block out and they got offensive rebounds. To lose on Senior Night, it hurt. But we had to understand they’re a good team and there were more games to be played and we had to move on.

“Hopefully, (Friday), we’ll see them and we’ll get revenge.”

UCLA has had its revenge tour, avenging all three of their losses in conference play with victories in February. The Wildcats’ revenge tour starts now. They have a chance to avenge their two league losses — UCLA and Oregon — in about 26 hours in Las Vegas.

Here are three things to watch in the Arizona-UCLA game:

In UCLA’s victory in Tucson, the Bruins out-rebounded Arizona 35-28. They used a 14-4 edge on the offensive glass to blast their way to a 20-4 advantage in second-chance points. That’s to UCLA’s credit, but it is not its usual model of success. Let’s call that more of an aberration than a trend. Arizona had the rebounding edge, 42-33, in its victory in Pauley Pavilion.

UCLA point guard Lonzo Ball is going to do Lonzo Ball things. There’s not much you can do about that. Arizona’s focus has to been to stop senior shooting ace Bryce Alford from going off, and you can tell that by how coach Sean Miller assigns his defensive ace.

Allen guards Alford because Miller has felt that Allen is the best at chasing Alford around multiple screens as he searches for a shot.

“He’s a senior. He knows how to play the game,” Allen said of Alford.

That’s the kind of offensive brilliance Arizona didn’t always have (Lauri Markkanen usually notwithstanding) when Trier was out for 19 games after a positive PED test.

“I’m just going out there being myself,” Trier said. “I’m trying to help my teammates the best I can and contribute and give them something they didn’t have for the 19 games I didn’t play.”

UCLA played great against Arizona in Tucson, with just a little more hustle and a little more focus. A couple of plays here and there ended up making the difference, as the Wildcats’ comeback fell just short when Kadeem Allen air-balled a late 3-pointer in a 77-72 loss.

For sure, the Bruins could just shoot their way to victory — not much anybody can do when they get hot — but it’s hard to see Arizona getting pushed around on the boards again. (Perhaps, Keanu Pinder — Mr. Energy — is a potential answer.)

If Arizona wins the boards, it wins the game.