LAS VEGAS — When Sean Miller says the word “man” in the same vernacular as “Come on, man” when answering a question from a reporter, something is really out of the ordinary.

Miller was asked in the press conference, after Arizona’s 86-75 win over UCLA Friday night, what the Wildcats must do differently against Oregon this time around when the teams play in the title game Saturday night at T-Mobile Arena.

That’s like asking how to better play with fire after getting burned. Oregon was on fire in the Ducks’ 85-58 win in Eugene, Ore., on Feb. 4, making 16 of 21 from 3-point range before missing their last four shots from there.

“I mean, they have to miss a few shots, man,” Miller said incredulously. “They went on a roll like I’ve never seen before. There was just nothing you could do.”

Both teams enter the Pac-12 tournament championship game with 29-4 records, and they shared the regular-season conference title.

Tyler Dorsey, who once committed to Arizona during the recruiting process, made all six of his 3-pointers and Dillon Brooks was 4 of 7.

Brooks went so far to say the shooting display was “ridiculous.”

“I think you can’t take too much from that game,” Arizona guard Allonzo Trier said after scoring 19 points in the Wildcats’ win over UCLA. “They couldn’t miss. It was one of those games you just have to take and move on.” 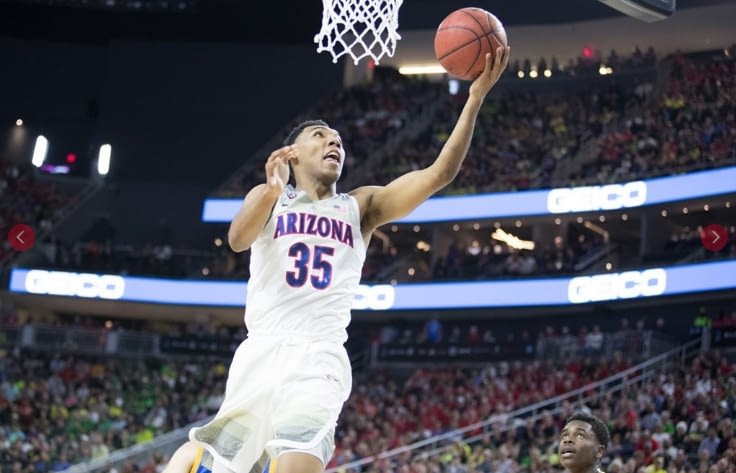 Arizona ranks 27th nationally defending the 3-pointer, allowing opponents to make only 31.3 percent of their shots from that far. Oregon ranks 58th in the nation shooting 38 percent from beyond the arc.

UCLA entered Friday’s game ranked fourth making 41.3 percent. The Bruins made only four in 25 attempts (16 percent) in the loss.

“We knew they were going to take crazy threes,” Rawle Alkins said. “They live and die with the threes. We made sure every shot was contested. When they’re hitting their shots, they look like a million dollars and when they’re not, they look crazy.”

The championship game is significant in terms of where the winner will be placed in the NCAA tournament. The champion might be the No. 2 seed in the West with West Coast Conference champion Gonzaga the No. 1 seed.

“Location is important,” Oregon coach Dana Altman said. “We played Wisconsin in Milwaukee. That wasn’t much fun, so some of those things do matter.

Arizona guard Kadeem Allen said it is imperative for the Wildcats to stay in the West after the Wildcats were eliminated in Providence, R.I., last year in the first round by Wichita State.

“It felt strange like we were out on our own, out of our element,” Allen said. “We want to be around our fans and stay close to home. In order to that, we must take care of business against Oregon.”

Oregon forward Jordan Bell, who had 15 rebounds and five blocked shots in the semifinal win over Cal on Friday, said the Ducks have something to prove because they shared the regular season title with Arizona.

“Winning this title means a lot, obviously, because you obviously want to win the regular season and the tournament to show that it’s not a fluke,” Bell said.