LAS VEGAS – So, this is what Arizona is capable of. It’s shown glimpses of greatness from time to time all year. Friday night was once again Arizona’s time.

Arizona went from the Tin Men to the Win Men it a couple of short and soul-searching weeks after beating UCLA 86-75 and are now 29-4 overall. 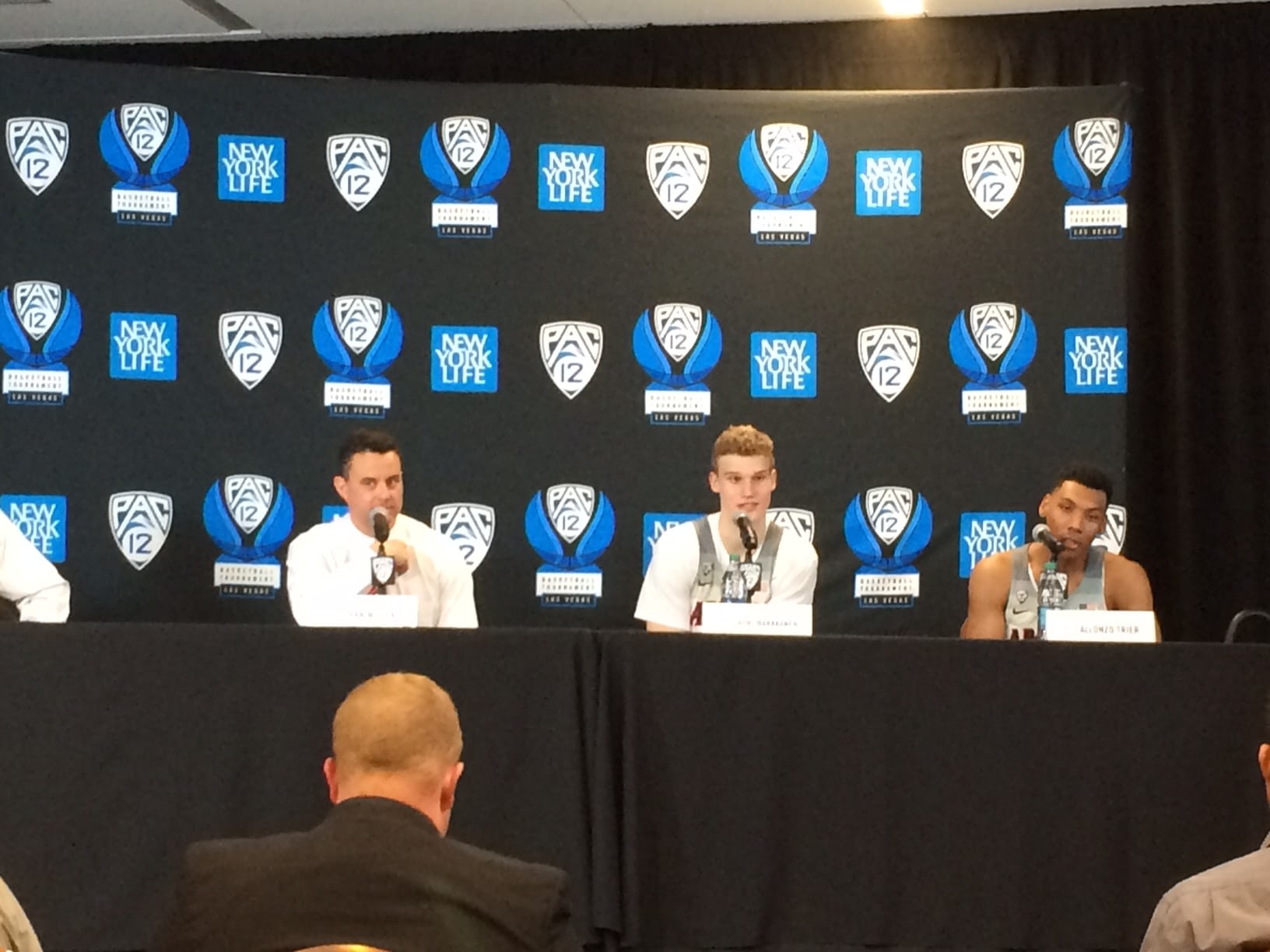 “Never been prouder of a group of kids,” head coach Sean Miller said. “We lost a tough game at home in our last (home) game. We really stuck with these guys and motivated them to be better. We had the opportunity and we took advantage of it and thought we played a really hard-fought, physical game and came out on top.”

Revenge couldn’t have been any sweeter for Arizona as it advanced to the finals of the Pac-12 tournament, set to face top-seed Oregon on Saturday night.

“We’re a tough team to beat when everything is going well,” said Kadeem Allen. “The whole team gets involved. Guys come in and do their job and when that goes well we are a better team.”

Some players said yes others said no.

“I don’t need to remind you guys of the punishing that Oregon gave us at Oregon,” said Rawle Alkins. “It’s another bounce back game and we owe them one just like we owed UCLA.”

“Well, we know what we came here to do and we know what the task ahead is tomorrow,” said Trier, who had 20 points. “There’s nothing wrong with playing another night and getting a good win, and we’re not going to let this overshadow and let us sleepwalk into tomorrow. We’re proud of the way we played; we’re going to come out prepared tomorrow.”

Here are three things Arizona did to get by UCLA. Of course, there were more:

The search party that was out for Lauri Markkanen can be called off – he’s been found, and just in time Parker Jackson-Cartwright said.

“I don’t think we were worried and I don’t he was either,” PJC said of Arizona’s offense behind Markkanen. “We were just waiting for one to go in because we knew if one would go in the rest would kind of follow. It’s the right time.”

Sean Miller said Markkanen may have gotten away “from focusing on the things that he’s always done naturally.”

Lauri Markkanen talks to reporters about his shooting.

But now Markkanen can be more comfortable near the basket and away from it. Friday night he looked very good away from it, hitting 4 of 10 3-pointers.

“I think it’s getting better right now because we have a mix of me playing outside and inside,” he said. “That helps.”

As for his shot, he said it feels the same – as in the past when he wasn’t shooting well – but “it feels nice that it is going in.”

Arizona is not the same team you saw a few months ago. It’s more aggressive and attacking. One of the things Arizona did was attack the zone and went after rebounds. This time, Arizona out rebounded UCLA 38-32 after getting crushed on the boards two weeks ago. It was without question a priority.

There are two guys who are the ones behind it: Kadeem Allen and Rawle Alkins. Allen is playing like his life depended on it and Alkins is playing as if someone trying to take something from him.

Allen said he feels good in his transformation of being a little laid back to being more confident and aggressive. “It feels good with me being a senior,” he said. “Guys look up to me and I lead. They help me make the team that much better.”

It also helps Arizona plays well when they play man-to-man defense. UCLA mostly does that. So, it allowed UA to run and stun. “We love to push the ball,” Miller said. “… we’re our best when we are in transition.”

On Thursday night Parker Jackson-Cartwright had seven rebounds and seven assists. On Friday night, he had three rebounds, four points and four assists and three steals. He was everywhere in his 29 minutes. He says it’s his experience that has brought him to this point.

“It’s my third year and I’ve played behind great guards,” he said. “Great guards. T.J. McConnell. He taught me a lot. He taught me about toughness and poise. Every time I’m out there is as different possession and you have to play every possession as if it’s your last.”

“When you look at him out there now, he’s the best player that he can be,” Miller said. “He ignites our transition game.”