Soon enough we’ll get a timeout from this last-second timeout feud between Arizona coach Sean Miller and UCLA’s Steve Alford — unless the teams meet in the national championship game — but a look at the video of the game at McKale Center adds something to this controversy.

Alford called a timeout with 1.2 seconds left with his team up 77-72 in Tucson a couple of weeks ago. Miller responded by calling a timeout with 0.9 seconds left up by 11 in the Pac-12 tournament semifinal game Friday night. It was a tit-for-tat move you wouldn’t expect from coaches at that level.

Commentators such as Jay Bilas at ESPN questioned Miller’s sportsmanship and said the move in retaliation was “petty.”

No argument here. It was petty in the grand scheme. I’m a believer of taking the high road.

But I also believe coaches should be honest. They should not be blatantly untrustworthy.

Alford told reporters that he “just wanted to set my defense because we haven’t won there, so I didn’t want anything goofy to happen.”

Los Angeles Times columnist Bill Plaschke took Miller to task, tweeting, “Alford was just trying to settle his kids, while Miller was trying to settle a score…too bad AZ’s own coach detracted from its great win.”

Settle his kids up five with 1.2 seconds left? Is there a five-point shot in college basketball I don’t know about?

Not only is Alford’s comment outrageous, the video shows that he was not very serious in the huddle rallying his team to buckle down to a crazy environment that could somehow cause UCLA to foul Arizona on a length-of-the-court shot while possibly getting a technical foul on top of it — all in one second — miraculously getting the Wildcats back in the game.

And you thought the magic bullet in the JFK assassination was far-fetched.

ESPN’s video clearly shows Alford having a joyful chit-chat with former Arizona commit T.J. Leaf while UCLA’s players looked on without getting any kind of instruction. At one point, Leaf looks over at the Arizona huddle with a smile while Alford looks like he is giving him a pep talk. Moreover, when they broke from the huddle, the Bruins did not get into defensive position. They joyfully strolled to the other side of the court.

Leaf’s commitment with Arizona did not end on good terms, obviously.

This is not a case of two wrongs don’t make a right. It’s a case of three wrongs — Alford appearing to be dishonest — with his remarks after the loss in the Pac-12 tournament just to cover himself from embarrassment.

You be the judge in these photos with the interaction of Alford only with Leaf and none of the other Bruins in that last second timeout in Tucson: 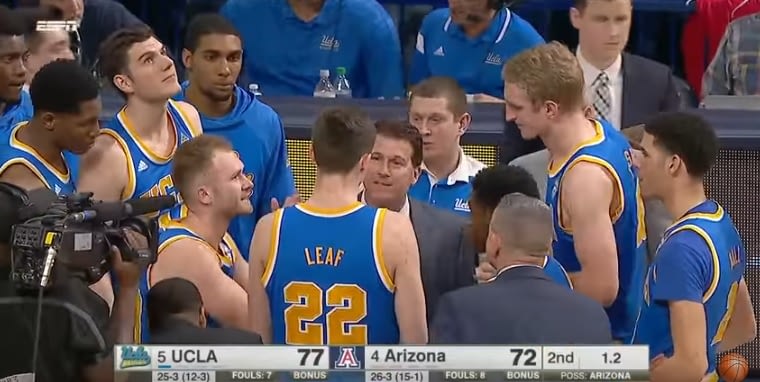