LAS VEGAS – It came down to poise. Arizona had it down the stretch. Oregon didn’t.

What a change for two teams that were polar opposites just a few weeks ago when Arizona got drilled in Eugene, Ore.

But as Sean Miller said his team “had to find ourselves and figure out how this was going to work.”

It was patience (maybe a smidge) and poise (gaining it). 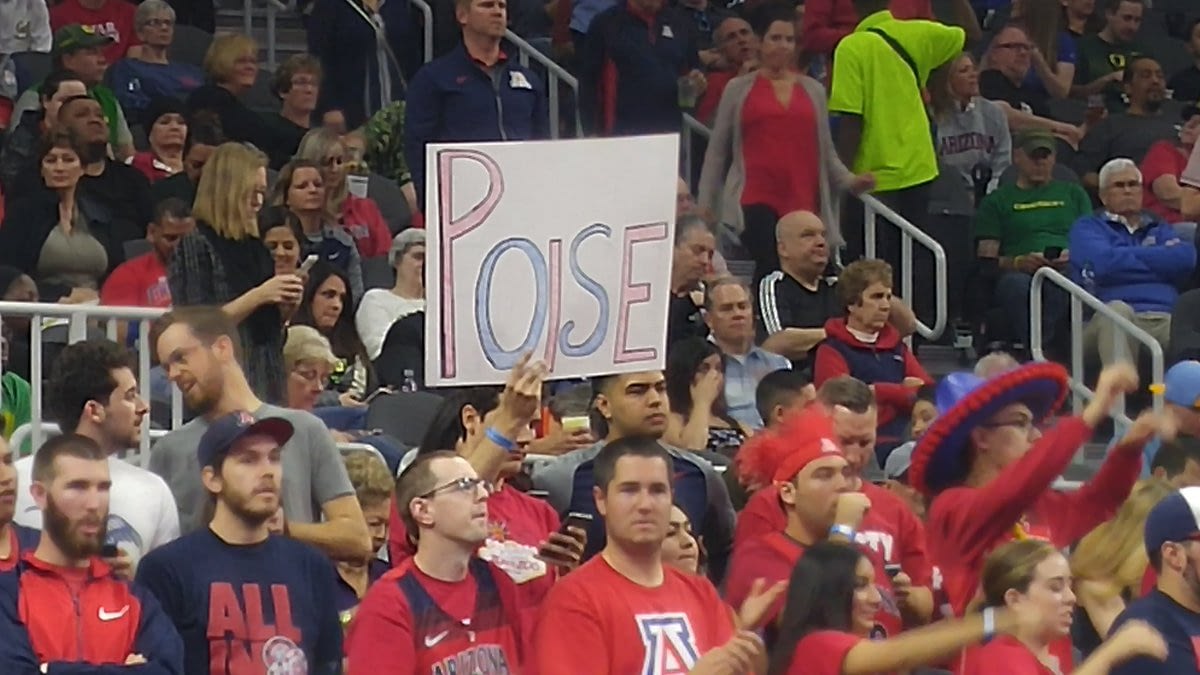 The Word of the Night for Arizona.

Arizona played aggressively, together and composed … and it is now six-time champions of the Pac-12 Conference after knocking off Oregon, 83-80, here at T-Mobile Arena.

“I’m proud of this group of players and the team that we’ve become,” Miller said. “We’ve been able to climb and grow.”

It hasn’t been a meteoric rise but a gradual one as UA had to deal with injuries and a suspension that left the team depth-deprived.

“You always hope that it comes together for you in March,” Miller said. “Right now that’s really what’s happened.”

Where do the Cats go from here? Well, now it gets a bit trickier as the madness that is March really begins next week with the NCAA tournament looming.

“These situations are good for us to be battle-tested because we know it’s not going to be easy in the tournament,” said Allonzo Trier, the tournament MVP.

If the Pac-12 tournament was any indication then Arizona is on the right path. What path will be determined on Sunday afternoon when the NCAA Selection Committee presents the pairings.

Where will Arizona go? How high will it be seeded? And will it have the energy and guts to get back to Arizona to play in the Final Four back in Phoenix?

“I’m not going to even get caught up in that,” Miller said, responding to a question about possibly being a No. 1 seed. “They have a hard decision to make. Our record speaks for itself. The losses that we had, if you do your research, and I know you guys have, we didn’t have a full team. Allonzo missed two of our four losses. Parker (Jackson-Cartwright) and Allonzo missed one of them.”

In Saturday’s special night for Arizona, once again, everyone played a part. Some bigger than others but those who played had an impact.

Here are three things UA did to win another Pac-12 title.

The man of the moment, Allonzo Trier, had a number of moments to live by. He hit three big 3-pointers. He hit 10 of 11 free throws, hitting four critical ones in the final 17 seconds to secure the win after UA had uncharacteristically missed four straight to keep Oregon’s hope alive.

It was Trier who ended the hope. It’s a situation he’s prepared for for years.

“I work very hard to make those,” he said. “My work ethic and preparation helped me and make me prevail. I put in a lot of time to make sure I can make those. It’s a mental focus.”

He’s had to have that mental toughness all year given his situation with the 19-game PED suspension. Miller has called it an unusual situation but on Saturday night he said it was all but appropriate to have Trier as the MVP. He finished with 23 points. On Friday, he had 20 points. He’s had seven straight games with at least 19 points.

“I couldn’t think of a more appropriate ending than watching him walk away with the MVP,” Miller said. “Again, I don’t want to make this the finish line. Hopefully, this will be a sign of things to come for us. Everybody points towards next week and we’re no different.”

He has the hyphenated name and the collegiate game. He’s Parker Jackson-Cartwright and he’s been able to set the tone for Arizona when he steps on the court. He brings poise in the backcourt UA needs if it has any hope of advancing deep into the NCAA tournament. If Arizona needed a big shot, Parker provided it.

Additionally, he had two key rebounds, one late in the game that helped UA stay ahead.

Parker Jackson-Cartwright talks about how UA controlled the pace.

The shortest man on the court had one of the biggest impacts. It was a “rise to prominence,” Miller said.

“He answered the bell,” Miller said about his backup point guard. “He’s a really good player for us. He’s playing at the top of his game, and these guys will tell you when he’s in the game, he sparks our transition.”

And he defends, too.

“His growth and development has been a real source of pride and I think something that’s helped us finish very strong to this point,” Miller said.

Said Trier: “He’s been tremendous shooting the ball and he’s bringing energy and a spark when he comes into the game. He brings an element that is special to our team. He’s a big reason why we were so successful this weekend.”

They probably don’t get the overall attention they deserve but Chance Comanche, Dusan Ristic and Keanu Pinder did a tremendous job helping on defense and contributing on offense.

Arizona needed all three to have strong games – and they came through.

Dusan Ristic went 2 for 3 from the floor, including a three-point play with 7:53 left to give UA 63-56 lead as Oregon was making its charge.

And then there was Keanu Pinder, who got his first start of his UA career so it would alleviate pressure on Lauri Markkanen when it came to fouls. All had a hand in trying to guard Oregon sensation Dillon Brooks. And, well, they did, given Brooks went 8 for 18 from the floor and struggled to get anything going consistently. Brooks, however, did have 25 points.

“In the eight minutes that he played there in the beginning of both halves, he did his job,” Miller said. “He took some pressure off of our front line and we did not get in early foul trouble.”

Pinder said it felt great starting and “I just thought I’d come out and try to do my best on defending Dillon Brooks. I got in foul trouble early which wasn’t good. I felt like I hurt the team. It’s not good to be in the first five minutes of the game and be in foul trouble.”

He wasn’t done, however. He hit Arizona’s first basket to begin the second half.