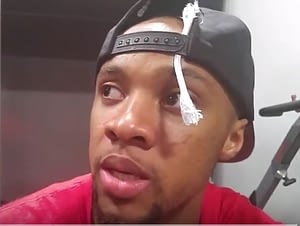 Parker Jackson-Cartwright after helping cut down the net at the Pac-12 tourney.

You know that saying, “There’s no such thing as a good loss?” Sounds good. Sounds tough-minded.

“We play with a toughness that I don’t think we had early in the year that we all of a sudden gained,” junior point guard Parker Jackson-Cartwright said after Arizona won the Pac-12 tournament title Saturday night in Las Vegas.

All of a sudden gained?

You can guess where the Cats gained it.

“I think you could say that,” Jackson-Cartwright said. “I think I would say it, too.”

We all know that Arizona coach Sean Miller stewed about that UCLA calling timeout with 1.2 seconds left, up five points. Which means he transferred that anger to his players. So, when Miller returned the favor, calling timeout with 0.9 seconds to go in UA’s tournament semifinal victory over UCLA on Friday night, Arizona freshman Rawle Alkins called that “some Savage Life stuff right there.”

A loss can re-focus a team, provide clarity, motivation. Since the UCLA game, Arizona is playing hard, playing angry.

The run through the Pac-12 tourney set up the Wildcats as a No. 2 seed in the West, opening Thursday against No. 15 seed North Dakota.

“A loss always helps us in an ironic way,” Jackson-Cartwright said. “I’m glad we got some of those losses out of the way, because it taught us a lot, taught us how to persevere and get through tough times and through adversity. I think losing to UCLA helped us win a game like this …

“Great teams get better as the season goes, and we’ve definitely turned a corner. We’ve turned a corner in a big way. In a big way. … Guys have stepped up and our leaders have led. Everything is coming together. It’s exciting to see.”

The Pac-12 tournament was a revenge tour for Arizona, with the Wildcats avenging regular-season losses to UCLA and Oregon. The NCAA Tournament could be partly the same way.

No. 1 seed Gonzaga, which beat Arizona in Los Angeles in early December, could be waiting in the regional final. And there’s another loss for the Cats to think about: Last season’s opening-round defeat to Wichita State.

“It’s a healthy reminder of how quickly the season can end,” Miller said. “We’ve had a quite a few players that have reflected on that moment through the offseason and even this year.”

Yeah, that bad loss to the Shockers can now be turned into a good loss.

That chip-on-their-shoulder mindset has served the Wildcats well in recent week.

They need to maintain that.

Because, now, in the NCAA Tournament, there’s no such thing as a good loss.