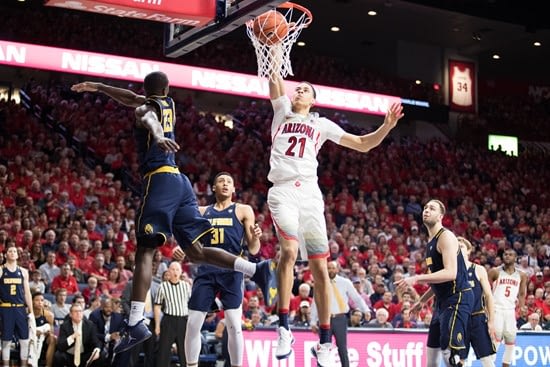 Bill Walton has broadcast his last Arizona Wildcats game of the season. That might make you happy. Or sad. To each his (or her) own.

Either way, after all the games Walton called this season as an analyst for the Pac-12 Networks and ESPN, it was impossible to escape the one way he constantly referred to Arizona sophomore center Chance Comanche.

A couple of things to understand here: It’s not a nickname that Walton himself made up for Comanche, and Comanche himself is perfectly fine with it.

“People have been calling me ‘Chief’ since like my freshman year of high school,” said Comanche, from Beverly Hills (Calif.) High School. “It’s just now getting out more and more. (Walton) asked me about it, and I said, ‘Yeah, I love “Chief,” that’s what everyone calls me.’

“He just started calling me that and now it’s growing.”

“Chance,” he called out across the locker room Saturday after UA won the Pac-12 tournament in Las Vegas, “why we call you Chief?”

The answer came back to him, and Alkins kind of shrugged.

“I came in here with them already calling him that,” he said. “So I was just kind of brought into it.”

Also know this: Comanche’s mother, Melissa McGee, doesn’t appear to take any offense with the nickname, either. The bio on her Twitter account reads, in part, “Proud Mom of CHANCE ‘CHIEF’ COMANCHE”

Comanche’s Arizona teammates have often referred to him as “YC” — Young Chance, or now “Young Chief.”

“Now, they’re starting to call me ‘Chief’ a lot, too,” Comanche said. “It’s just growing on everyone.”