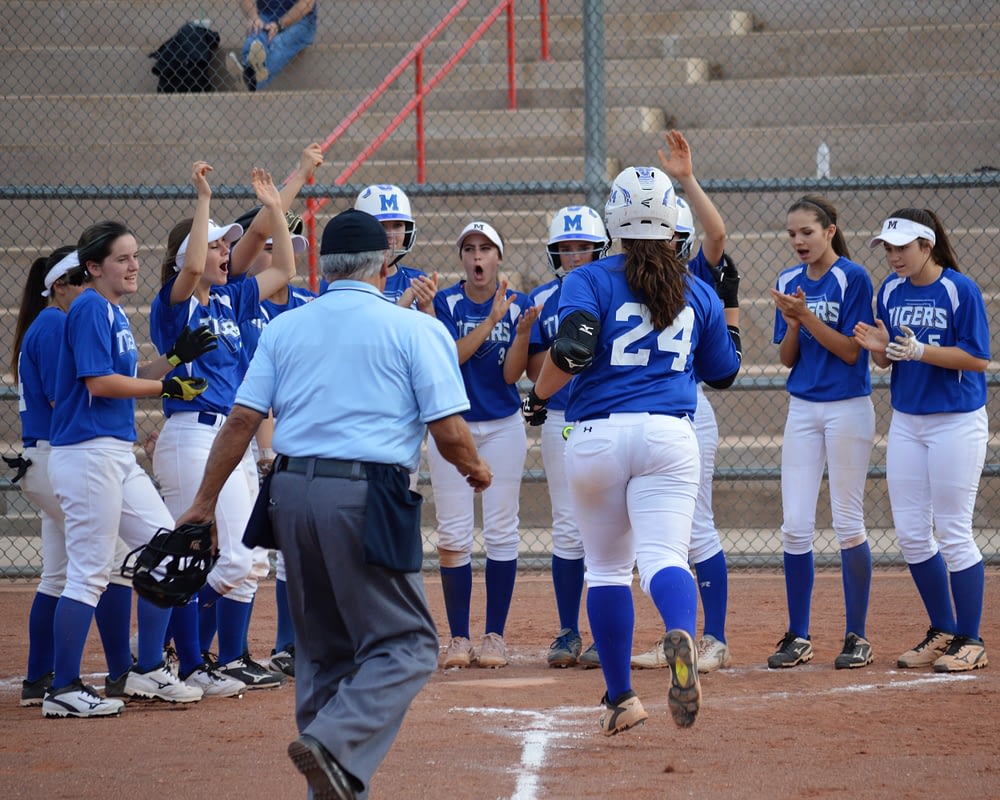 Marana beat Desert View 16-3 to open up play at the Badger Softball Classic Wednesday night. Nine teams from Southern Arizona are taking part in the tournament held at Cherry Field this week with the championship game slated for Saturday, Mar. 18 at 4 p.m.

The Tigers scored nine runs in the top of the first to set the tone for win over Desert View with Katie Faulk delivering on a three-run blast to open the scoring. Faulk was a standout catcher for the Tigers last year but the arrival of sophomore catcher Kelsey Hawkins allowed the Utah commit to help out her team in other ways, including taking the circle.

Faulk batted .411 last year with 10 home runs but the Tigers came away with a 7-22 record. The team is sitting with a 6-8 record this year and Faulk has eight home runs to her name at the midway point. Her two shots against Desert View gives her 33 for her career.

“I’m still seeing the ball pretty well but last year was tough,” Faulk explained. “I think we are coming together this year and we have some senior leadership to guide us.”

With Hawkins behind the plate, Faulk is able to take the circle from time to time. It’s a position she hasn’t played in three years but she picked up her third win of the year on Wednesday.

“The seniors are stepping up and doing anything it takes to help our team win,” Faulk added. “I stopped pitching three years ago, but I’m playing my role for the team.”

As mentioned earlier, Faulk has committed to play for Utah and the senior will play catcher for the Utes.

Marana added two more runs in the second and five more in the third with Faulk connecting on a solo shot in the inning. Diondra Bodman went 2-for-4 with a double and two RBI; Kiley Lynn went 3-4 and Courtney Grubbs finished 2-4 with two doubles and four RBI to lead Marana. Faulk had her two home runs and four RBI.

Desert View responded with a run in the bottom of the first on an RBI ground out from Amaya Taiese to score Reanna Martinez. The Jaguars were able to load the bases but Faulk got out of that jam.

Marina Gomez hit a double in the bottom of the second and Martinez picked up an RBI to help bring in two more runs but that was all the offense the Jaguars would collect. Martinez went 2-3, Gomez went 2-3 and Giselle Seym went 2-2 to lead Desert View.

Cheyenne Hudson took over for Marana in the third inning while Marina Garcia, Gomez and Abigail Dorough all saw pitching action for Desert View.

Both teams played later in the night with Desert View losing to Tucson 8-1 and Marana dropping a 6-2 game to Empire.