SALT LAKE CITY – They have made their marks one way or another: Steve Kerr and Craig McMillan, Khalid Reeves and Damon Stoudamire, Mike Bibby and Miles Simon, Jason Gardner and Gilbert Arenas.

Nearly 30 years ago, Point Guard U got its name and carried on the tradition with a here-and-there guard or two coming through to carry on the moniker. More recently it was T.J. McConnell, who turned into the prototype point. 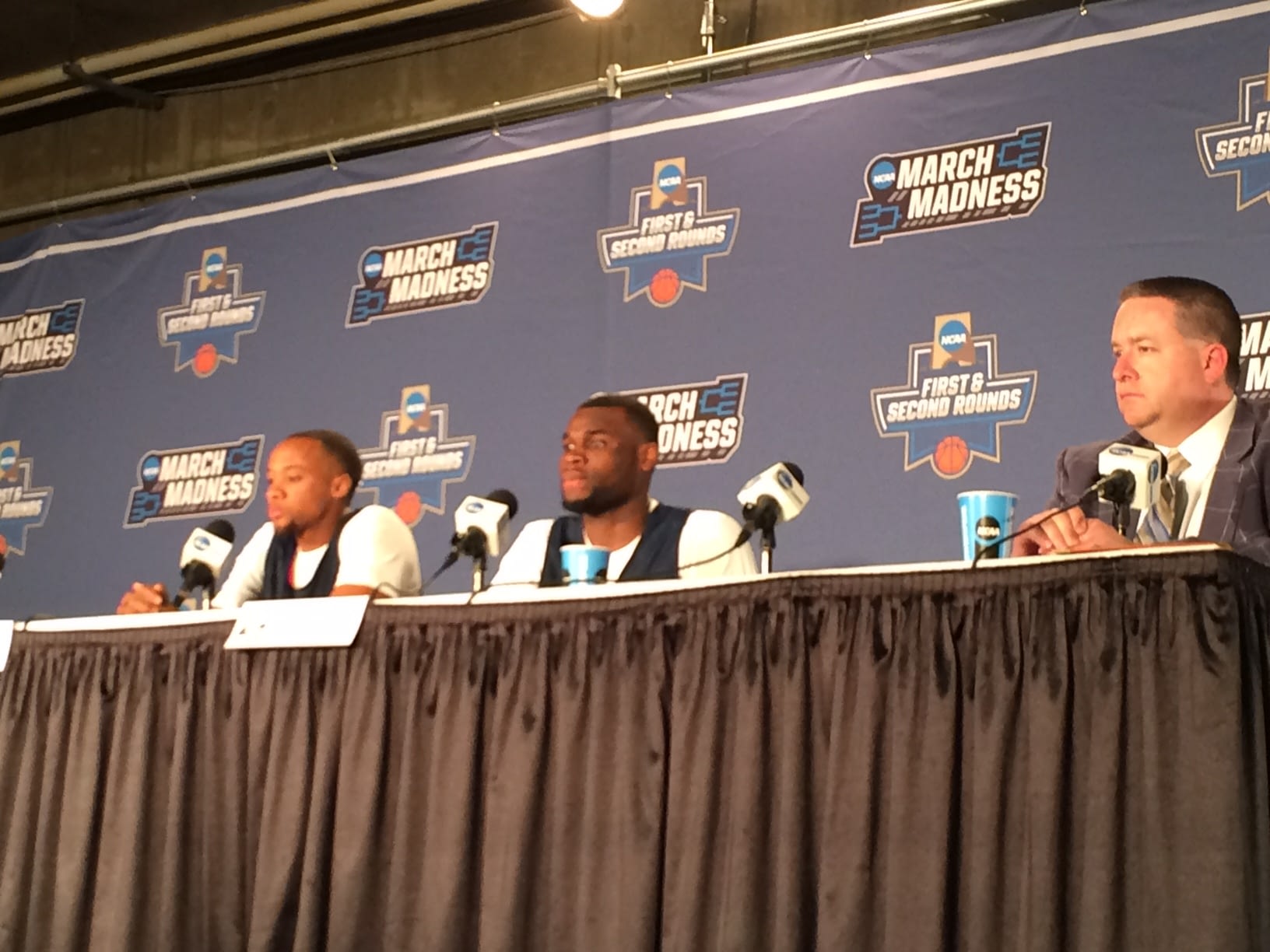 Parker Jackson-Cartwright and Kadeem Allen speak to the media before Thursday’s game with North Dakota.

Now, it’s Kadeem Allen and Parker Jackson-Cartwright’s job to make their mark. Either they will … or they won’t. To this point, they haven’t even been muttered in any sort of conversation about top points in Arizona’s long list of backcourt leaders.

But, how far Arizona goes in the 2017 NCAA Tournament will eventually become their legacy. It’s what comes with the territory of the Arizona backcourt.

“I think we’re the best duo in the country,” Allen said last week after UA won the Pac-12 title. “That’s a bold statement and I really mean that from the bottom of my heart.”

“You can see how much they respect him and the value he brings to our team,” Arizona coach Sean Miller said of Allen, referring to his selection as an All-Pac-12 first teamer. “He does it in so many other ways. (And) Parker is playing his best basketball of his career. That’s why we are scoring more points. He ignites our transition game.”

Clearly, Arizona has two guards who can lead whatever charge is needed. Allen is the fifth-year mainstay who has become the do-everything defensive guy. Mr. Respected. The Defender.

PJC is the waterbug that can make Arizona go fast or, well, faster.

“My teammates and coaches believe in me,” said Jackson-Cartwright. “I’m here for a reason. I do things that are unique and that can help this team win.”

What he definitely is is a capable guard who McConnell all but promised would show up. Two years ago — in every opportunity he had — McConnell said Arizona didn’t have to worry about the backcourt with PJC around. He’d be more than capable, McConnell said.

And he has been, particularly more recently after returning fully from a high ankle sprain that had him out six games in December. It took him some time to get re-acclimated into the system. But now he’s rolling, using his speed and cunning to get the ball in the right place at the right time.

His assist-to-turnover ratio is better than 3-to-1 in the last two months and his shooting percentage is, well, through the roof. He’s hit 17 of 25 3-pointers since the first week of February.

“He’s been tremendous shooting the ball,” said teammate Allonzo Trier. “He’s bringing us a spark when he comes in. He takes the speed of the game to another level. He’s a big reason why we’ve been successful (recently).”

PJC admitted it took longer than he had hoped it would. He said he was 100 percent upon his return from the sprain.

“I didn’t feel comfortable and it’s not a coincidence I didn’t have a rhythm,” he said of his game upon his return back. “(But) I wasn’t hitting my shot even before I didn’t have (the sprain). But I stayed in the gym and got the confidence in my shot (and) that has really helped me.”

Parker Jackson-Cartwright after helping cut down the net at the Pac-12 tourney.

As for the job he’s done this season, he said he thinks he’s done a good one.

“But I’m my toughest critic,” he said. “I pride myself on wins and if I can contribute in any way and help I’m doing my job. With that, I’m doing a pretty good job. I just hit my stride a couple of weeks ago. I think I can do better and improve still.”

Now would be the time to do it, although Miller said PJC has become an improved defensive player, an “outstanding” 3-point shooter, and he has rebounded at a high level.

“He’s doing everything,” Miller said, “and what you want to see with an upperclassman.”

Same goes for Allen. Miller has raved about him in recent weeks. He did again on Wednesday here.

“He embodies all the qualities that every coach would love to have in a senior leader,” Miller said. “He’s a great teammate, hard worker, tough.”

In fact, Allen has become more aggressive and almost invincible, playing like every game is his last breath, which, in a basketball sense, it is, given this is his senior year.

“I’m very, very proud of Kadeem, not only of what he’s doing on the court, but he’s become a great leader,” Miller said.

“He has the ultimate respect from our locker room. He’s a calming force. And somebody I think everyone respects. It’s not about what he says but how he proves it. He’s a winner. It’s no coincidence we won both the regular season and conference title in his senior year. He has a lot to do with it.”