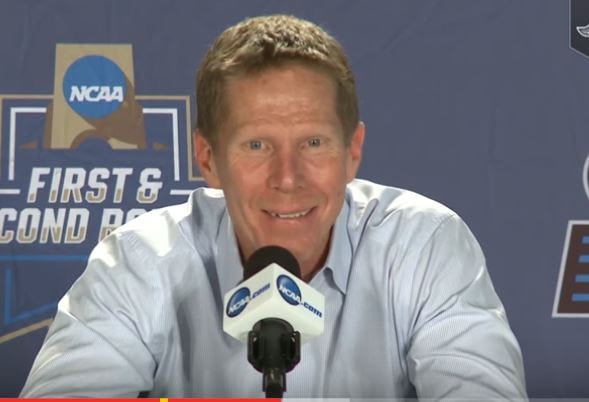 Mark Few is trying to get to his first Final Four.

Gonzaga and Arizona, the top two seeds in the West Region, are on a collision course to get to the Final Four.

Sure, there’s a ton of work to do for both before that game becomes a reality in the regional final, but it’s impossible to not consider the ramifications of such of a meeting.

Mark Few of the top-seeded Bulldogs and Sean Miller of the second-seeded Wildcats are at the top of everybody’s list of best coaches to never reach the Final Four. If their teams meet, something has to give, of course.

Few, whose team plays No. 8 Northwestern tomorrow in Salt Lake City before the Arizona-Saint Mary’s game, was asked Friday about his friendship with Miller and if the Final Four thing ever comes up in conversation.

“We’re good friends so we talk, we text. We root for each other,” Few said.

“And I have total respect, program to program and staff to staff. But, no, I think it’s safe to say you guys talk about the both of us not making a Final Four more than we ever talk about it. We talk hoops. We talk family. We talk everything. He’s a great guy. Funny guy.”

Sean Miller cuts down net at the Pac-12 tournament.

Miller was asked Wednesday in Salt Lake City about the lack of a Final Four appearance on his resume.

“I think the older you get as a coach, the more seasons you have under your belt, you deal with different groups, it’s so much about the journey,” he said.

“I think the success of the entire journey, the entire regular season, has to be taken into consideration. But at the end of the day all of us are judged by what happens in March. And I think for us to duck that or look at that as not being the case is somewhat unrealistic. For us, it’s you have to advance.

“You want to take advantage of a good seed. You want to play your best basketball in March. And if that happens and you still don’t advance or win, then I think all of us walk away with our head held high. And we’ll put our ball away and come back next year.

“I try to focus more on that. Clearly the goal is to get all the way to the end.”

Former ASU coach Bill Frieder was a guest on 1580 The Fanatic in Phoenix earlier this week, talking about how the bracket “is set up big time for Arizona … there is absolutely no question about it.”

And what if Miller doesn’t get to the Final Four this season, will that stain his resume?

“That will definitely put a stain on it, because if there is ever a time he should get there, it’s this year,” Frieder said. “You do get those labels. I don’t agree with them, but you do get the label. This guy is a great, great coach and his record speaks for itself. …

“I have the utmost respect for Sean Miller. He’s been a proven winner in his entire life. Some of the great coaches in America never got to the Final Four. There is always a little luck involved.”