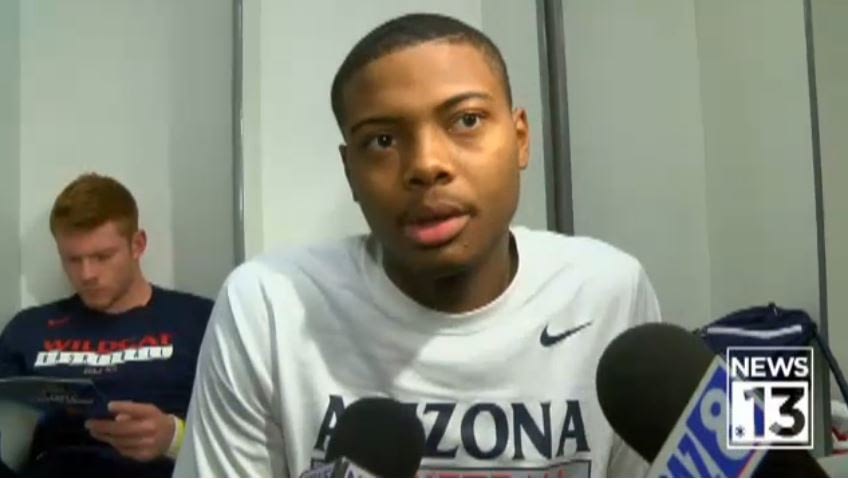 If you’re looking for an Arizona Wildcat with a big smile, a great attitude, look no further than the kid who has suffered a torn ACL three times.

Redshirt freshman forward Ray Smith is along for the ride as the second-seeded Wildcats look to advance through March and into early April, seemingly at peace with the end of a basketball career that was potentially worth many, many millions of dollars.

“Definitely a lot of difficult struggles going on with my ACL, just really figuring out how I’m going to adjust my life according to what I want to do next,” Smith said Wednesday from the Arizona locker room in Salt Lake City, talking to Damien Alameda of our media partner, KOLD-13/TucsonNewsNow.com.

“It’s just been a big mystery, but I still thank God for everything he’s given me. I still get a chance to get my education and my degree and press toward new goals.”

Smith first tore his left ACL before his senior season of high school. Then he tore his right ACL in preseason practice before his freshman year at Arizona. Then, in an exhibition game against College of Idaho in November, he went up for a layup and crumpled to the ground, the right ACL torn again.

“I just felt in myself that I couldn’t do it anymore, couldn’t press forward anymore,” he said.

“It’s tough working three years, day in and day out, in the summer, after school, before school, on improving your knees and pressing toward the mark you want to be at. You finally get there and, genetically, your body just still can’t handle the game.

Smith said staying positive is “never easy” but he rarely ponders the inevitable question that would drive many mad: Why me?

“It’s just, all right, that’s what it is,” Smith said. “It’s time to move on to something different.”

Smith, bubbly and articulate, already has an idea of what he wants that something different to be: A college basketball analyst on TV.

“Basketball might be over for me playing-wise, but it doesn’t mean it’s over for my life,” Smith said.

In that sense, he said he heeded advice from his father.

“He always preached to me, ‘Hey, you always have to stay a good person. Just because you’re good at basketball doesn’t make you a good person,'” Smith said.

“I kind of just thought of it the opposite way: Just because I don’t play basketball, it doesn’t make me a bad person. I always kind of kept that mentality, because he instilled that in me.”

Smith has been part of the team’s journey this season, and his presence was especially felt at home games. Coach Sean Miller came up with the idea of using Smith in the team’s popular pregame video at McKale Center, giving him the coveted closing line, “This is … Arizona.”

“For him to have that, it’s one of the ways we’re able to keep him engaged with what we do — not for his benefit, but engaged meaning that everyone continues to have awareness of him and what he went through and that’s he’s a part of our basketball program.”

Arizona fans got the message.

“The University of Arizona fans are amazing,” Smith said.

“They hit me up on social media every day, just asking me how my day is. They never once allowed anyone to forget me. That’s such a blessing.”

Smith wasn’t with the team for the Pac-12 tournament, although the public address announcer called his name when everyone took turns cutting down the net after the win over Oregon in the championship game.

Who knows? There might still be a net-cutting ceremony in Smith’s future.

“The No. 1 thing it means to me is being here for these guys,” Smith said of being in the NCAA Tournament. “Hopefully, we can have a great dance.”

A lot of folks, myself included, could learn a lot from Ray Smith's attitude. pic.twitter.com/jXXHaUYgia