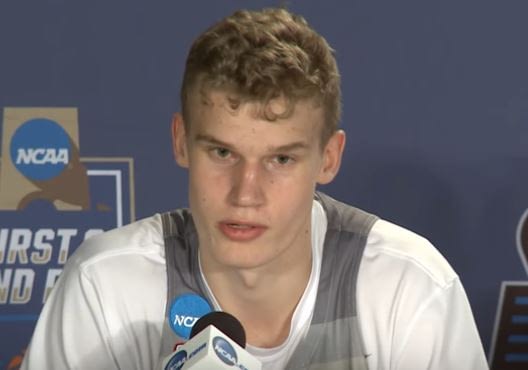 Lauri Markkanen meets with the media after the win over North Dakota.

SALT LAKE CITY — It had been 17 NCAA tournament games since Arizona has broken 100 points in a game. Arizona did that against North Dakota on Thursday night. And, well, it still didn’t feel good.

The rout was never really in doubt – 100-82 – but the way it occurred was a bit strange. Arizona didn’t play like Arizona has in the recent past. It played like it didn’t care at times.

How does at team march into April if it doesn’t get the job done in March?

“The character we bring to the table most times we didn’t bring,” said Chance Comanche. “You could see it at times. But then when it came back you could see us pull away. For us to advance in the tournament we have to be consistent.”

“Coach was saying we didn’t bring our identity like we have and like we did this past weekend in Las Vegas,” said Arizona guard Parker Jackson-Cartwright.

Maybe it was the wake-up call Arizona needed to get better for its even tougher game with St. Mary’s on Saturday night.

“It was the first game and a lot of it had to do with us,” PJC said.

It was perhaps the kick-in-the-pants Arizona needs to move forward to play better.

“We need to be more locked into our attention to detail,” said Jackson-Cartwright. “It’s made us good all year.”

About 20 minutes after the game, and on the podium discussing the win, Arizona coach Sean Miller said: “I think the sentiment is we wish we felt better about our defensive effort and I think we (would) have put one heck of a game (together)”

The good news is Arizona gets another chance on Saturday against St. Mary’s. North Dakota and 15 others weren’t able to say that on Thursday.

Here’s a look at Arizona and what went well and what didn’t.

It was an inside job

Throughout the first half, Arizona went to big man Lauri Markkanen, establishing him near the basket. He came through for 16-first half points. He’s gotten quite good at getting points near the basket. Had it not been for his slump a month or so ago, it might not have happened. He got established back then.

“We have concepts that we use … get the ball inside,” Markkanen said. “My teammates did a real good job of getting me the ball close to the basket. I didn’t have to create my own shot.”

As Miller said, “we utilized our size. That’s important in a game like tonight to play to our strengths.”

Miller called Markkanen’s effort “terrific” in the first half but “I wish we would have done a better job getting the ball to Lauri in the second half.”

In the second half, it was more Dusan Ristic, who had 12 points.

“We have to be at our best every time,” Comanche said. “Everyone has to be at this point. We can’t have an off point because that one off point could be the end for us.”

Last weekend against Oregon, Arizona struggled from the free throw line. That was uncharacteristic. On Thursday, Arizona went 24 for 28 from the line. No problems. It helped Arizona maintain a good, sizable lead.

“We’re an excellent free throw shooting team and we got there,” Miller said.

In other areas, Arizona out rebounded North Dakota 40-31. And its bench outscored North Dakota 20-13. It’s the little things that will eventually matter. It also only had seven turnovers.

And how about the 14 minutes from Kobi Simmons, the one-time starter who has taken up a reserve role? He did have two big baskets in 14 minutes of play. He added a block.

“I felt great,” he said. “It’s always been like that for me. Like I’ve said, when I get my minutes and I get the opportunity to play I (can be) myself just like I was before I (wasn’t a starter). I’ve had the same confidence. I’ve never lost it.”

When told that it wouldn’t be a surprise if he’ll be needed in a crucial time in the next few games (if Arizona advances), he said, “We’ll see.”

After the win, Sean Miller raved about his two freshmen – Markkanen and Alkins – who were huge in the win. In fact, they’ve been huge all season in their leadership roles of doing so much. The freshmen have carried the Cats to this point.

Rawle’s 20 points were a monster effort. He went 8 for 8 form the floor. Markkanen had 20 points as well.

“The first round of an NCAA tournament you’d expect freshmen to struggle (but) Lauri and Rawle were our two best players,” Miller said. “And in Rawle’s case, it may have been his best game at Arizona, 20 points, five assists, no turnovers.”

Rawle said he had “no nerves.”

Is it overrated in saying freshman can come into a game and be nervous or scared?