These are memories of the sweetest of Arizona’s Sweet 16 matchups with the Wildcats facing Xavier on Thursday.

It will be the second time Sean Miller will face his old school in this round winning the previous matchup 68-60 in Los Angeles two years ago.

Here are the top five Sweet 16 wins for Arizona in program history:

Lute Olson beats his former school behind a memorable performance by frontcourt players Sean Elliott, Anthony Cook and Tom Tolbert. The trio combined for 61 points on 26-of-43 shooting from the field. After struggling to a 38-34 halftime lead following an 11-2 Iowa run, Arizona quickly built a 62-43 lead with 13:24 remaining thanks to a 9-0 run. Elliott’s slam-dunk on a pass from Steve Kerr capped a 6-0 burst that made it 68-46 with 11:54 to play. The Wildcats’ biggest lead was 74-48 on Kerr’s 3-pointer with 9:47 to go. “We came out a little tight,” Elliott told reporters after the game. “But after we settled down and got into the rhythm of the game, we started playing the way we can play.”

Salim Stoudamire hit an off-balance jumper from the left side with 2.8 seconds left giving Arizona the thrilling victory. Arizona shot 65.9 percent from the field. Channing Frye (15 points and 10 rebounds) and Hassan Adams (19 points and 10 rebounds) had double-doubles. “I thrive on those situations,” Stoudamire said afterward. “That’s what I live for. That’s why I play basketball. Big-time players step up in big-time situations, and I see myself as one of those players.”

Derrick Williams has one of the best individual performances in Arizona history with a career-high 32 points and 13 rebounds. He made 11 of 17 shots from the field, including 5 of 6 from three-point range. Lamont Jones added 16 points and six assists. The Wildcats dominated Duke and coach Mike Krzyzewski 55-33 in the second half. “The second half was just complete nastiness, as coach would say,” Kevin Parrom told reporters. “We came out swinging. We didn’t let up. We knew they were just going to focus on Derrick and that’s when other guys came in and stepped up. It shows that it’s not just Derrick Williams who is on this team.” 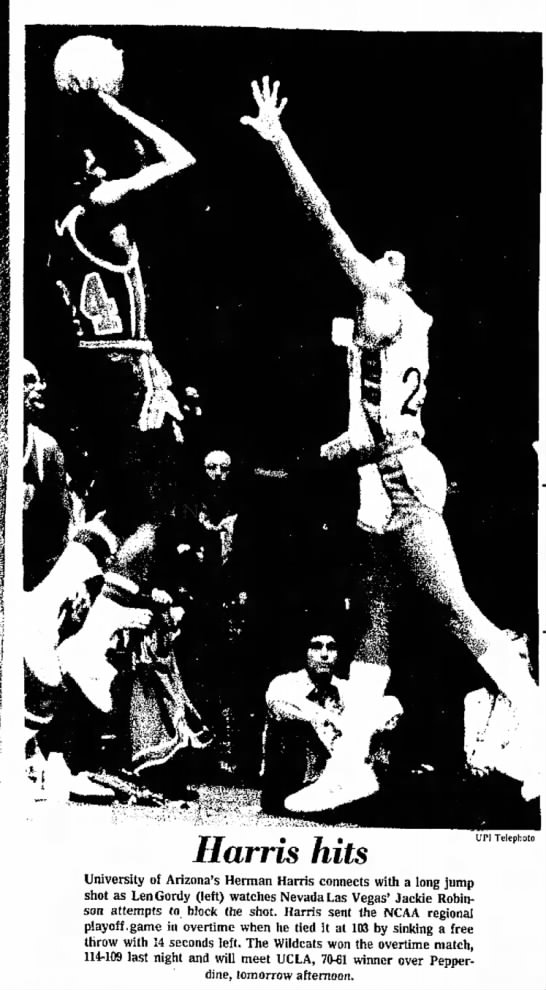 As good as Williams was against Duke, Herman Harris was better against UNLV and Jerry Tarkanian in this high-scoring classic before the shot clock and three-point line were instituted. Harris came an assist and rebound away from a triple-double. He tallied 31 points, nine rebounds and nine assists. Arizona had three players with at least 10 rebounds — Phil Taylor (15), Bob Elliott (12) and Al Fleming (11). “It was a conscious effort to go to Herm because I felt he could win it for us,” Arizona coach Fred Snowden told the Tucson Citizen. “Under pressure, this was probably his best game for us.”

This was not only the best Sweet 16 win it was the best win in the program’s history. The Wildcats went on to win the title over Kentucky, but what made this game more significant is the unlikelihood of the outcome. Kansas was No. 1 with a 34-1 record and Arizona, which had nine losses, finished fifth in the Pac-10. Kansas — a 10 1/2-point favorite — also featured future NBA players Jacque Vaughn, Paul Pierce, Raef LaFrentz and Scot Pollard. “This was all about believing in ourselves because nobody else did,” Michael Dickerson told me (as a reporter for The Arizona Daily Star) after that game. “Nobody gave us a chance, even people in our own state. But I think that made us that much stronger. We shouldn’t be looking for respect. We should have that already.”