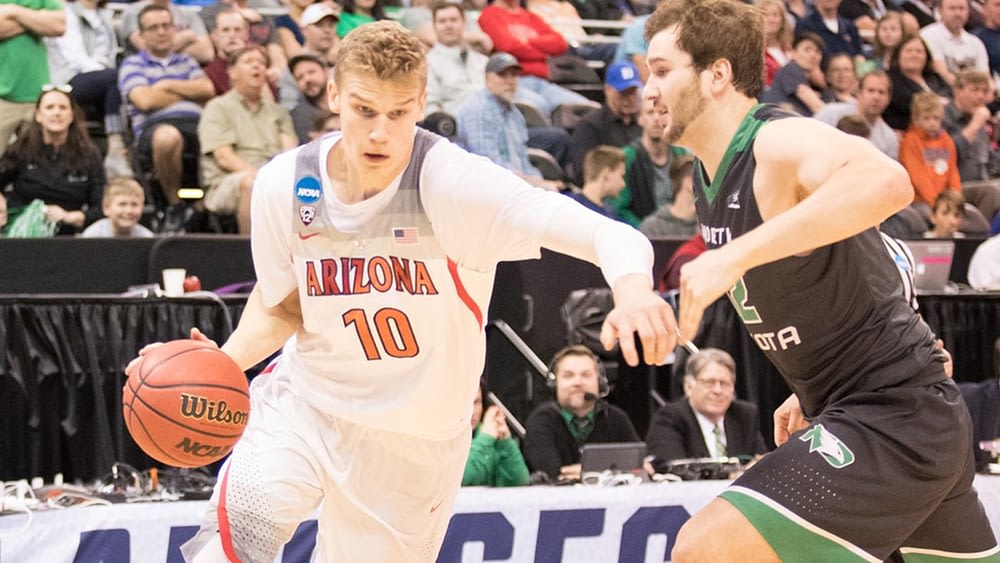 What can’t he do? (Photo courtesy Arizona Athletics.)

Arizona’s 7-foot forward is keeping good company, as College Basketball Reference reports that he is only the sixth freshman since 1992 to have minimums of 500 points, 250 rebounds and 50 3-pointers. That’s versatility.

The three others, as you can see in the tweet above, are Donte Greene (who was a late first-rounder in 2008), Cal’s Ryan Anderson (the No. 21 overall pick in 2008) and North Carolina State’s Brandon Costner, who is still playing professionally overseas after going undrafted.

Markkanen figures to be closer to Durant and Anthony in terms of draft selection — maybe not No. 2 or No. 3, but a sure-fire lottery pick. As for future All-Star games and such, we’ll see.

Markkanen’s rarely-seen skills as a 7-footer have been on display all season, although his emphasis lately has gone from 3-point shooting to being a tough guy in the paint. Not only is that where most of his scoring has come recently, his second-half defense against Santa Clara center Jock Landale was instrumental in helping the Wildcats pull away for a 69-60 victory.

“I just tried to be as physical as I can and don’t let him get the ball,” Markkanen said after the game.

He started the season by hitting better than 50 percent of his 3-pointers (54 of 107) through 22 games. In the past 14 games, he has slumped to 14 of 50 from behind the arc, with eight of the makes coming in two games — vs. Colorado and UCLA in the Pac-12 tournament.

But teams, of course, still have to respect that versatility, which he showed in a key 36-second stretch late in the game against Saint Mary’s.

Markkanen hit his only 3-point attempt of the game from the right corner with 3:29 to go after the Gaels had pulled within 58-55. He then blocked Landale at the rim on the other end, with the ball going out of bounds to Arizona. On the next possession, Markkanen drove to the hoop, drawing Dane Pineau’s fifth foul. Markkanen made two free throws for a 63-55 lead.

That’s some SavageLife stuff right there.

In any case, Markkanen’s ability to play inside or outside, use finesse or muscle, makes him one of the most unique freshman in college basketball in the past 25 years.