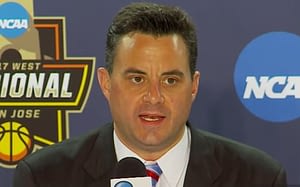 Sean Miller addresses the media after the Sweet 16 loss to Xavier.

It was all set up for Arizona. The seed, the path, the team … everything.

But it all went awry after the Wildcats went up eight points with 3:44 to play Thursday night in a Sweet 16 game in San Jose, Calif.

Over the next 224 seconds, the stars fell out of alignment for Sean Miller‘s team. The offense, the defense — all of the lead and then some — unraveled, became part of Arizona’s Hall of Broken Dreams. Allonzo Trier‘s late 3-pointer rattled around the rim and bounced out and just like that, with a snap of the fingers, the journey of several months was over.

Xavier, the moxie-filled 11th seed in the West, finished on a 9-0 run to shock second-seeded Arizona 73-71, the latest indignity for one of the country’s finest and most consistent programs. The Wildcats haven’t been to the Final Four since 2001, have lost in a regional final five times since then and couldn’t even get that far this season in a bracket that seemed so favorable it was as if Arizona drew it up itself.

But the Wildcats failed to stick the landing.

For much of this season, Miller was rightly touted for perhaps doing the best coaching job of his career. He navigated one of the youngest teams in the country through multiple injuries and Trier’s mysterious 19-game NCAA suspension, peaking with a Pac-12 tournament title after wins over highly ranked UCLA and Oregon.

You’re hot … until you’re not.

And Arizona was not Thursday night.

The Wildcats never looked comfortable against Xavier’s zones and mix of defenses. While they often had good looks, they made only 7 of 27 3-point shots. The worse number there is 27. That’s too many for Arizona, with its interior size and ability to drive, to be shooting.

And, Kadeem Allen notwithstanding, this was not close to Miller’s best defensive team. That showed, too, at a terrible time. Trevon Bluiett joined the list of Arizona’s NCAA villains with 25 points and the key bucket of the game — a life-giving 3-pointer with 3:25 left when the Wildcats led 69-61.

Guard J.P. Macura was another thorn. He scored 14 points, with seven rebounds and five assists.

“I knew going into the game it was going to be a challenge, and there were a number of breakdowns we had,” Miller said in his postgame press conference.

“Some of this is this is our plan, we have to execute it, and then there’s some other things that, you know what, Chris (Mack) is a great coach. And they have some clever older players in Bluiett and Macura. And they all know their role on that team and they executed.”

Miller will have to carry around a couple of extra pounds on his back for another season. The monkey grew heavier. “Best Coach to not Get to the Final Four.”

There will be plenty of micro-analysis of Miller’s tactics.

–Why doesn’t he mix in some zone defenses to his all-the-time, pack-line man-to-man scheme?

–Why does he often burn through timeouts, such as Thursday night, not having any left to set up a last-possession situation?

–Why wasn’t his team more comfortable with its zone offense after 36 games?

–Why doesn’t he let the Wildcats run more, play faster?

It’s hard, logically, to bash his schemes, his strategy, his preparation, given all the success. In the past five seasons, each of his teams has ranked no worse than 31st nationally in offensive efficiency AND defensive efficiency, according to kenpom.com. He’s doing something right.

Point to the lack of a Final Four, sure, but it doesn’t necessarily make sense to start over just because Derrick Williams and Jamelle Horne missed last-possession 3-pointers vs. UConn, or that the officials made a bad charge/block call against Nick Johnson, or that Sam Dekker couldn’t miss a shot in the second half.

To me, it’s all about at-bats.

Miller is only 48 years old. He’s been a head coach for 13 years already. He’s been to four regional finals, including one at Xavier.

Miller is going to have many more at-bats in the NCAA Tournament. Someday, he’ll hit the ball out of the park.

But what is really going to sting — in one of the worst ways of Miller’s career — is that in 2017 he swung and missed at a fastball down the middle.