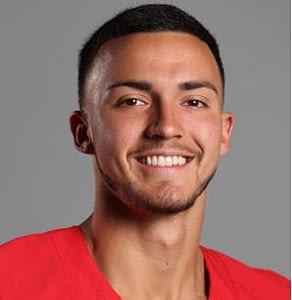 It’s not unusual that a relatively unknown football player has a big scrimmage. Sometimes, it’s just one of those quirky things, and you never hear from the player again. Other times, it’s a sign of things to come.

Which brings us to Matt Aragon.

Aragon, from Cienega High School, has been with the Arizona Wildcats the past two seasons as a walk-on punter, but he was getting a bit bored with that.

So, he recently went to coach Rich Rodriguez with a request.

“He came to me about two weeks ago and said, ‘Coach, I just feel like I’m working too hard to just punt a couple of times at the beginning of practice,'” Rodriguez said Friday night after a spring-ending scrimmage. “He said, ‘I still want to compete at that, but I want to play some wideout.’

So, Aragon — now listed on the UA roster as a P/WR — played some wideout Friday night.

Aragon caught two passes for more than 50 yards on the same drive from quarterback Khalil Tate. He was wide open on the first one, but couldn’t keep his feet after making the catch. The second reception — an over-the-shoulder grab along the right sideline — went for 34 yards to the 1.

This catch from Aragon sets up the white team for an easy score!!

Aragon, 6-foot-5, played receiver/tight end at Cienega, catching 38 passes as a senior, according to MaxPreps.com.

“He certainly has the size you want. I’m glad he made that wise choice. Those guys are smarter than me anyways.”

Josh Pollack handled the place-kicking and most of the punting last season for Arizona, although Jake Glatting and Aragon each had punting opportunities later in the season. Glatting averaged 39.4 yards on 10 punts; Aragon averaged 38.7 on three tries.

Tate said he liked that Aragon is a big, tall target. Arizona is looking for productive, taller receivers. That could come from 6-5 senior Shawn Poindexter (a JC transfer in 2016) or 6-4 senior Zach Benjamin, eligible now after his transfer from South Florida.

“He brings size,” Tate said of Aragon. “He has nice hands, really nice hands. He’s learning the playbook. He’s always in the right spot, so it helps a lot.”

Rodriguez was asked what is his usual reaction when a punter (or kicker) asks to play a position.

“Most of the time, I tell them to look at the playbook, which has two pages. One, make the kick. Two, period,” Rodriguez said with a grin.

“I guess they studied the playbook and after five minutes they were ready for the next phase. But Jake Glatting is next, since he played quarterback. If Josh Pollack wants to play something else, that’s where I draw the line.”