SCOTTSDALE – It’s not often former University of Arizona head basketball coach Lute Olson gets applauded here in the Valley where maroon-and-gold is the prevailing color, but he was on Sunday afternoon.

It took a celebrity basketball game at Scottsdale Chaparral High to make it happen. 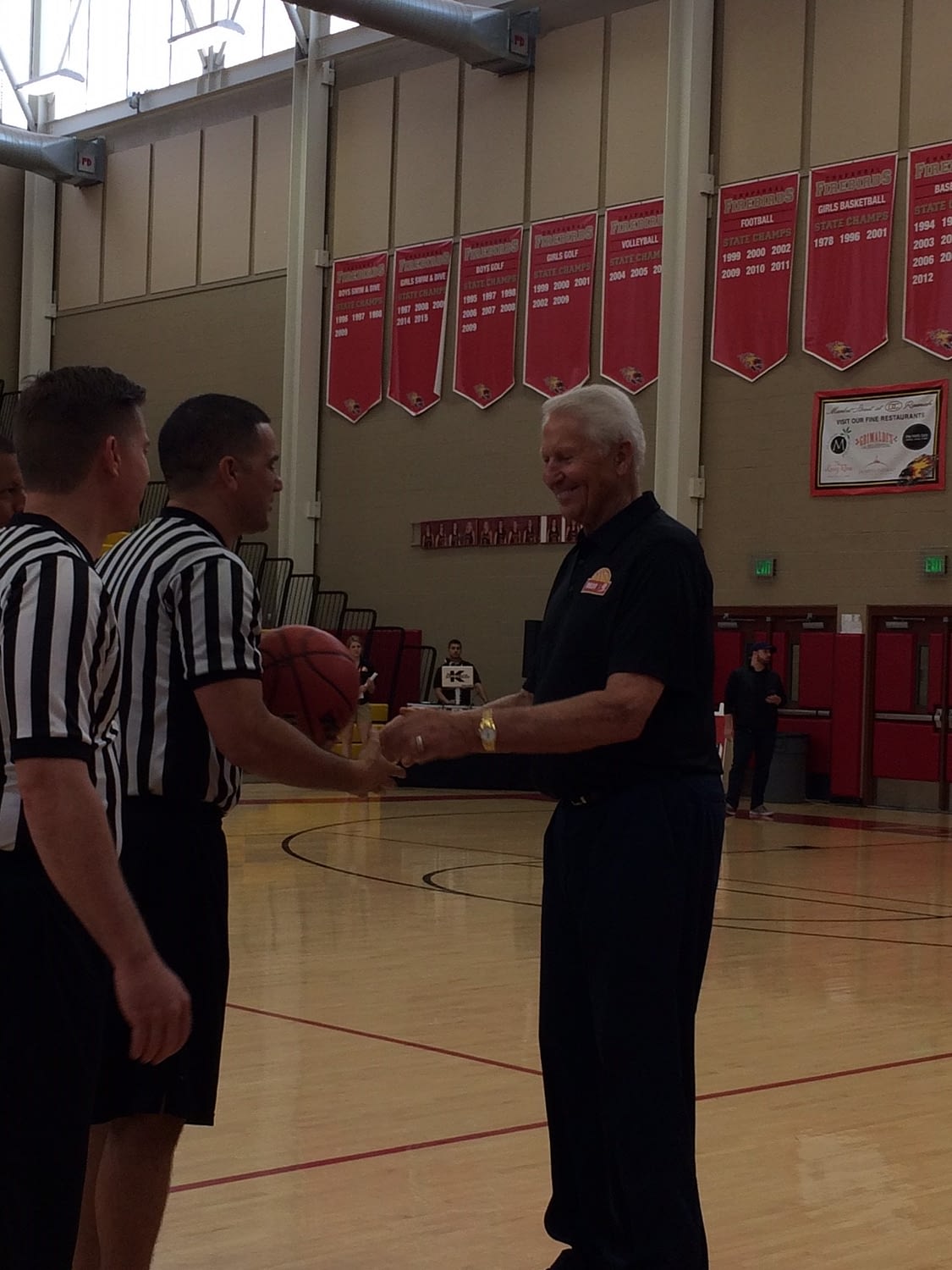 Lute Olson hands the game ball over to officials for the celebrity game (Steve Rivera/AllSportsTucson.com)

“I had fun,” said Olson after delivering the game ball for the event which featured a couple of his former guards Jason Gardner and Damon Stoudamire. “It was a good time.”

It doesn’t hurt to have the man-of-the-moment Charles Barkley on your side and Magic Johnson on the other. Olson and his wife, Kelly, sat alongside Sir Charles helping guide the white team to a victory in the 2nd annual Celebrity Crunch Classic.

“He’s been a great coach and obviously a friend,” Barkley said on Sunday afternoon after the game. “We’ve been friends for a long time and it was great for him to be part of this.”

Barkley coaches one of the celebrity teams (Steve Rivera/AllSportsTucson.com)

It gave Olson a chance to sit and the sideline and enjoy the game behind two guards who helped make Arizona Point Guard U.

“It was great to see them,” Olson said. “They’re a little bit out of shape.”

But there they were running – slowly – in a game that included former Suns guard Dan Majerle, former NBAer Terry Porter, former Cardinals quarterback Kurt Warner and others.

Each said it was good to see their former coach again.

“We’ve been talking a lot during the season; he came by to see us play a couple of times,” said Stoudamire, arguably one of the school’s top five players in the history of the program. “And it’s always good to see Jason.”

Damon Stoudamire in the middle of the game (Steve Rivera/AllSportsTucson.com)

The two have a good bond having established themselves in the UA backcourt for four years. Each helped guide UA to a Final Four. And now, both are head coaches. Stoudamire is at Pacific; Gardner is at IUPUI (Indiana University Purdue University Indianapolis).

Stoudamire went 11-22 in what he called a “rebuilding” year.

“I feel good of where we are headed,” he said. “We won three more games than the year before so I’m going to call it a success.”

Gardner is improving his program as well, although in small steps. He just finished his third year, winning 10 games the first year, 13 the next and 14 this past season.

“They are small steps but we are getting better,” Gardner said.

Jason Gardner talks to fans at the game (Steve Rivera/AllSportsTucson.com)

Gardner said it was great to be back in Arizona and exciting to see a lot of Arizona fans because “you get a little excited about that.”