North Carolina is the champion for the 2016-17 season after getting enough numbers and points to get by Gonzaga 71-65 at University of Phoenix Stadium on Monday night in front of 76,168 fans.

It was a game that seemingly set the game back a few decades in as much as neither team could hit a shot for the first 37 minutes of the game. Then, then – wait for it, wait for it –the Tar Heels broke away with a blocked shot by Kennedy Meeks that got Justin Jackson loose for a dunk and a couple of free throws that helped proved to be the difference for its sixth NCAA title.

“We got off to a good start, and it goes back and forth, and with three minutes to play we have the timeout,” said UNC coach Roy Williams, talking about the second half. “I think it was 3:08, I’m not sure. And I said, ‘if you would have told us that we were going to be in this situation the first day of school, meeting at my house, we would have all taken it.’ And that’s all Roy Williams did. I didn’t do one other dadgum thing.”

His players did the rest and got him his third overall. He has now surpassed former North Carolina legendary coach Dean Smith for titles.

“I don’t think Roy Williams should ever be put in the same sentence with Dean Smith, I really don’t,” he said. “I think Coach was the best there’s ever been on the court. And he was an even better person. And so it’s a little staggering. When I looked up at one of the boards tonight and saw those guys, they had more titles than our North Carolina teams had, not Roy Williams, because I don’t like it that way, but that was a little emotional for a second.

“But I really — I don’t know what to say. I mean, because that is — I’m very, very lucky. I’m doing what I’ve always wanted to do is to coach kids and trying to get them to have a common goal and make sacrifices. And it’s number three. But they’ve all been fantastic, and I’ve been very fortunate.” 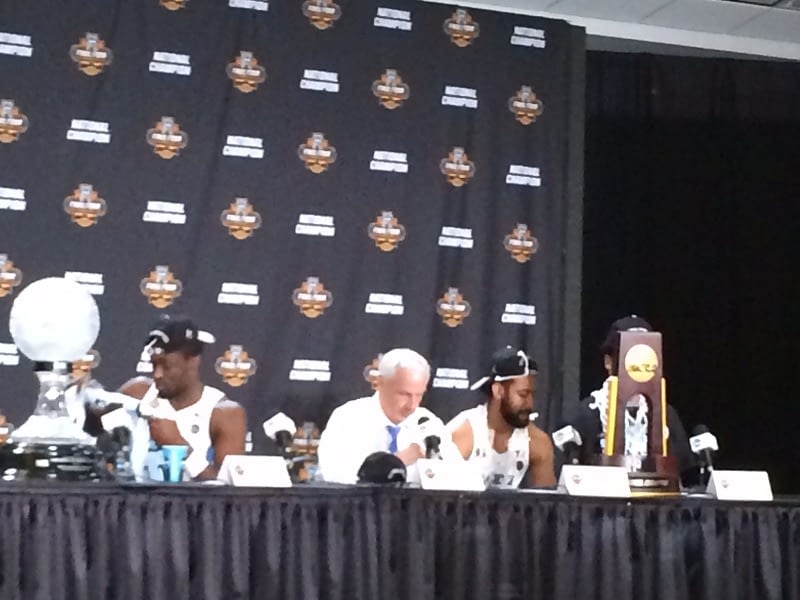 Still, how can anyone avoid these numbers? The Most Outstanding Player of the tournament, Joel Berry II, hit 7 of 19 shots and 4 of 13 3 pointers to finish with 22 points. The guy who could have easily been named the MOP was 6 for 19 from the floor, including 0 for 9 from beyond the arc.

Gonzaga coach Mark Few called it “a slugfest” and a game that was so close it feels “like a crushing blow.”

“Perspective will come in time,” he said, of his team finishing 37-2, the same record Illinois had when UNC beat it for Williams’ first title in 2005. Williams found that ironic.

But, on Monday night did anyone want to win?

“I don’t know what Mark (Few) said, but it was an ugly game,” Williams said. “I mean, I don’t think either team played exceptionally well offensively. The second half, they shoot 27 percent and we shoot 35 for the game. So I don’t think either team ever got in a real good flow. The fouls were part of it. But just the bigness — that’s a terrible way to say it. My wife’s an English teacher. But the game is so big that you get so hyped up, you have to control your emotions and be able to play within yourself. Justin Jackson’s 0-for-9 from the 3-point line and he rushed so many of them.

“In a normal game he may not have done that. So I think it was the magnitude of the game had a lot to do with it and the defenses on both ends, on both teams, I think had something to do with it.”

It was a long and grueling game – much like the season of ups and downs for the Tar Heels, a team that suffered seven losses this season yet was still considered one of the favorites to win the title.

The pace was stilted. The whistles were plentiful. If fans wanted a pretty game, they didn’t get one … unless you’re a Carolina fan because victories are never, ever ugly.

“It was an ugly game because two teams really wanted it badly and the other team wasn’t going to allow them to have easy things,” Williams said. “That’s what I think it was.”

"They did everything we asked them to do." – Mark Few #UnitedWeZag pic.twitter.com/lDjjQTekp2

It also helps sooth the hurt of last year’s last-second loss to Villanova in the finals.

“This is the best feeling I’ve ever felt,” senior Isaiah Hicks said. “We are the national champs. I feel like with the way it ended last year, we just worked so hard and we got it. We got this second chance and took advantage of it.”

In the end for Gonzaga, it will be remembered as a game of what ifs, especially from Przemek Karnowski, who went 1 for 8 from the floor, finishing with jus nine points. Again, those pesky numbers.

“I missed a lot of layups,” he said. “It wasn’t my best game. We threw the ball into the post and I didn’t deliver. So I’ll probably remember that.”

That, and, all those horrible numbers that plagued each team.

Still, in the end, it was the North Carolina players that danced.

“When you’re watching your kids jump around and the excitement, the thrill they have,” Williams said, “there’s no better feeling in the world as a coach.”