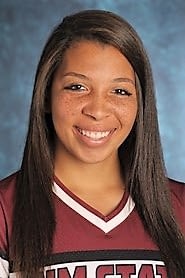 NM State’s Kayla Green was named the Western Athletic Conference Pitcher of the Week for March 27-April 1. This is the first honor of the season and second of her career for Green.

Green, a sophomore right-hander from Cienega., went 3-0 in three starts and picked up a save in four appearances last week. She posted a 1.97 ERA over 21.1 innings of work allowing just three extra-base hits – all doubles – on the week. She also struck out a WAC-best 10 batters while walking six. In a win at UTEP last Tuesday, Green threw 6.1 innings, allowing just two earned runs. In the WAC opener against Utah Valley, she earned a complete-game victory, allowing three earned runs on eight hits. The following day, Green picked up her second save of the season as she threw one hitless inning in the Aggies’ 4-3 victory. She then pitched another complete-game victory in the nightcap, giving up just one earned run on six hits while matching her season high of five strikeouts.