So, the NCAA men’s basketball tournament isn’t even 24 hours old and we have talk of next year’s top 25. I get it. Hell, I did it back in the day when, well, I thought it mattered.

It doesn’t but it is fodder for those who can’t live in the moment. It’s just like the media, always projecting what’s ahead because, well, there’s copy to produce and speculation to be made … even when nothing – or much – has been settled. 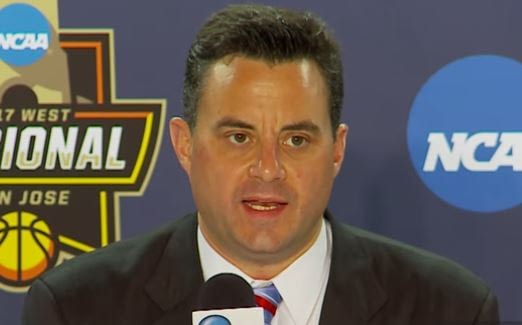 Case in point is the few Way-Too-Early ratings that are out. Good fun reads – by pretty good writers – but, hell, dust has to settle before anyone knows what teams will have what next season.

That said, The Sporting News has Arizona as its No. 1 team next year, given what everyone knows as of this moment: Lauri Markkanen leaving with Allonzo Trier and Kobi Simmons still contemplating their futures. But TSN likes the incoming class (DeAndre Ayton and the rest) that will be joining next year.

Talk about pressure and high expectations. But, when was the last time Arizona hasn’t had those?

ESPN did one this week and has Arizona at No. 11.

What’s clear is the top 25 will change from week to week, maybe even day to day. It’s a fluid situation and has always been a day after the season is officially over.

An then there is this: Vegas odds makers have Arizona at 15-1 to win next year’s title which puts it as about the eighth favorite on the list.

To those who have contacted me about the future of Arizona freshman Simmons, well, I hear you. Is he ready for the NBA and what’s he thinking when you hear he might bolt Arizona?

He’s thinking his time here has come and gone in what he had already had planned on it being a one-and-done year. What McDonald’s All-American player doesn’t think that?

Is he ready? Probably not, but just ask any of these guys – current NBDL players on rosters – if they aren’t ready for the NBA. Is he talented? No question but is he ready? For whatever this is worth, he’s projected to go 51st in this summer’s NBA draft. Still, he needs to learn how to play defense and learn how to become a better overall player. He can do that somewhere else he chooses to do so. But decisions to leave aren’t all that uncommon. It happens all the time. Heck, a few years ago, a former UA player told me, “every freshman that comes in wants to transfer after the first year.” It’s no different at other schools.

The guess is that he’s gone.

What Trier decides to do is anyone’s guess. Thought he was undoubtedly leaving when he was sitting out the first 19 games of his sophomore year. Why come back? Well, that’s unclear. Draftexpress doesn’t even have him on the draft board. So either they know he’s not coming out or … ? We will see, but the fan base is about 50-50 on whether he should return or not. Fans love him for his ability to score points; fans don’t like him because they feel he hogs the ball too much. It’s one or the other. Apparently, you can’t please everyone. The guess is he tests the waters and returns for his junior year.

It’s been less than a year since former UA star turned UA women’s basketball coach Adia Barnes arrived at her alma mater. Now, her name is being mentioned as a possible candidate for the just-opened head coach vacancy at Washington. That’s where she was an assistant coach before she returned here. She’s still as popular as ever at Washington and it’s likely she’d be a frontrunner for the position. She’d likely make a lot more up there than her base $235,000 here.

New Arizona athletic director Dave Heeke just started his job and now he’ll be on the clock to try to convince – maybe – Barnes to stay and build a program, one void of a strong postseason history. Of course, UA could get lucky and UW could go another direction. For Arizona’s sake, maybe they will.