Pete Williams, one of the best post players to suit up for Lute Olson and the Arizona Wildcats, discussed with me today the potential hire of former Washington coach Lorenzo Romar as an assistant coach with the program.

Williams and Romar share a background with Romar trying to recruit the 6’4″ forward with long arms and tremendous leaping ability to Cerritos (Calif.) Junior College. Williams grew three more inches in junior college, arriving at Arizona in 1983 at 6’7″.

Romar, with the Golden State Warriors at the time of his first meeting with Williams, played at Cerritos and was summoned by the coaching staff to talk with Williams about coming on board there when he was a senior at Walnut (Calif.) Nogales High School. 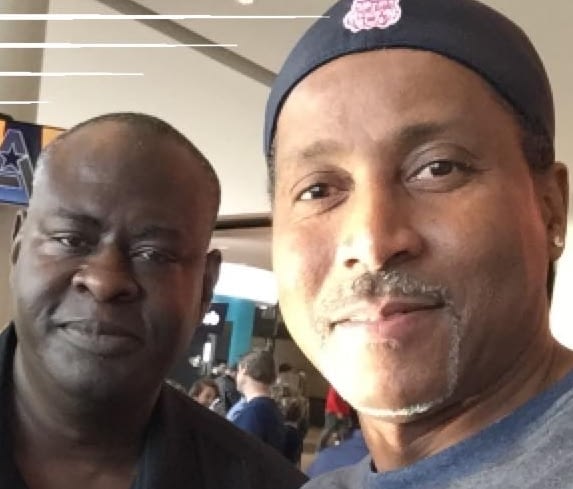 Pete Williams with former Arizona center John Edgar, both of live two houses away from each other in Chino Hills, Calif. (Pete Williams photo)

Williams, who decided to go to Mount San Antonio Community College instead, touches on that encounter with Romar in the interview (that can be heard by clicking on play above). Romar took him to a Wendy’s — such was the recruiting experience of a community college more than 30 years ago.

Williams, a probation officer, also talks about the dynamics of Romar’s potential hire by Sean Miller, including recruiting and the offensive flow with Romar’s up-tempo style. He comments on the impact Olson’s relationship might have played in Romar potentially coming on board.

We also talked about Arizona’s loss to Xavier in the Sweet 16, which dashed Williams’ travel plans to attend the Final Four in Glendale to watch the Wildcats play. He gave his viewpoint when I asked him about how frustrated he was about Arizona’s off-the-ball and interior defense exposed in the loss against the Musketeers.

Olson has mentioned that Williams is the best rebounder he coached at Arizona. In his two-year career — at the outset of Olson’s tenure in Tucson — Williams averaged 9.2 rebounds a game. He also compiled 41 blocked shots and 65 steals in 1983-84 and 1984-85.

Williams talks about Dusan Ristic’s defense and rebounding in particular and what he expects from the senior-to-be in 2017-18. He also comments on Chance Comanche’s game.