The tour three years ago of Gilbert “Niggie” Romero’s house presented by him and his wife Mary, his high school sweetheart, was one that will forever play on my mind like a documentary.

Three Purple Heart medals, Korean War artifacts, certificates of honor and American flags presented to him in respect to his dignified service, made the old central Tucson home somewhat of a museum.

Romero was emotional the most when showing an “escapulario”, or scapular, a religious symbol, in a glass case that was given to him when he was deemed to have suffered fatal combat wounds in the Korean War. 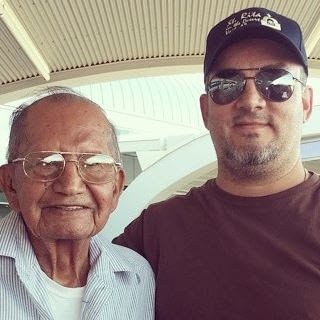 After losing a lot of blood, he was given his last rites and was left outside a medical unit in Korea. He held on tightly to the scapular and was miraculously later found to still be breathing.

A series of serious injuries in combat led to Romero’s perilous condition.

He was bloodied badly in both legs by shrapnel in a March 1951 firefight. A month later, a bullet shattered his chin and ricocheted out through his armpit. His jaw became dislodged. He was struck when Chinese troops brought down the helicopter that was airlifting him to a MASH unit.

After a landing that nearly ended with a crash, he was hand-carried with another injured Marine down a mountain to a convoy. He caught yet another bullet when the convoy was ambushed on its way to the field hospital.

Medical corpsman Jimmy Fisher of Tucson saw Romero and almost didn’t recognize him. He put the scapular into Romero’s hand and gave him his last rites.

A month later, Fisher, himself wounded, encountered Romero still breathing in a Japanese hospital. Romero woke up to find the scapular in his hand, without a drop of blood on it.

“I was holding on to it so tight, they had to pry it from my hand,” Romero told me.

Romero outlived many of the Easy Company (E-Company), 13th Infantry Battalion from Tucson, after it seemed as though he would be one of the first to perish because of the wartime injuries.

As part of the E-Company — the first Marine Corps Reserve unit from Tucson — Romero was thrust into active duty in the Korean War in July 1950, when he was 20 years old. After graduating from Tucson High School in 1948, he attended only two summer camps with the reserves before his deployment to Korea.

My father Hector A. Morales Jr. graduated from Tucson High School a few months before Romero and the E-Company were deployed in Korea in 1950. He later served with the Air Force during the Korean War and befriended Romero upon his return in 1953.

Romero and his wife attended many of our family functions when I grew up. He was a proud member of the South Tucson Lions Club with my dad. When my dad passed away in 2010, Romero was there with Mary to offer their support.

He was a dimunitive man, standing at only about 5’5″ and 145 pounds, but Romero always seemed larger than life. He did not want to be known as a hero — “I went to Korea to do what I was supposed to do,” he told me — but he indeed is one.

Romero’s athletic exploits included track and field at Tucson High School because of his speed. He also played golf, football and baseball while growing up near the Old Pascua Village on Tucson’s west side.

His nickname “Niggie” is one that is not politically correct in this day and age. He got the nickname while with an African-American friend when he was in grade school in the mid-1930’s because of his dark complexion. The nickname stuck and his black friends were among the many who called him by that name without any problem.

Romero was seemingly untouchable, able to get past anything. He was literally bullet proof. He endured more than 30 surgeries, mostly on his jaw (that had to be reconstructed) and eyes, in the 65 years following the Korean War.

In May of 2016, he attended my brother Hector’s birthday party and for the first time he appeared listless. He was quiet and his face appeared to be in pain.

Mary took him to the VA Hospital that night. He suffered a stroke that kept him at the hospital. He was unable to return to the home he was proud of, his temple.

His condition deteriorated over the last 11 months, but true to his inner strength, Romero kept fighting to stay alive.

That struggle came to an end on April 15, 2017. One of Tucson’s most notable war heroes — perhaps the greatest of them all — rejoined my dad and other members of the E-Company, 13th Infantry Battalion, in spirit.

Romero, 88, took his last breath 66 years after he was left to die in Korea.

His image of strength, much like his honor and the priceless artifacts of his military service at home, will live on.