On a night to remember, hard-hitting Katiyana Mauga didn’t even know if her fifth-inning home run was a record-breaker.

Such is life for Arizona’s short-in-size power-hitting third baseman.

Still, her line-drive homer that gave No. 3 Arizona a little wiggle room in its important 2-0 win over No. 6 Oregon at Hillenbrand Stadium was crucial.

“It was softball at its finest,” Arizona coach Mike Candrea said of the pitcher’s dual.

Candrea said it had the feel of a college world series game and fortunately for Arizona it had all the all-star power it needed in pitcher Danielle O’Toole, its short game and, well, Mauga.

“I wasn’t really thinking about it at the time,” Mauga said of the homer, which ties her with former UA hitter Stacie Chambers at 87. “I’m tied and there are more games left.”

More damage can be done later. In fact, her homer that sailed just over the left-field fence may have been overshadowed by her diving stab in the sixth inning ended an Oregon threat with the bases loaded.

“We were in a tough situation and I just wanted to do it for Toolie, go out there and make a play so we could go hit and score some more runs,” she said, nonchalantly.

Candrea had a different perspective, given he was just feet away from here on the play on the third-base side. He called it a big situation because it got Arizona “out of a jam. It was huge.”

“I was afraid it could have been coaches’ interference,” he said. “I know what it’s like on third base. You want to move but you want to move with her (gingerly). I was (thinking), ‘oh God, here’s an out but she got around it made the catch.”

How could he not call it that? He went as far as saying it brought back memories of the 1990s when Arizona was the dominant team of college softball and fans came in droves, inspiring their Wildcats to victory…

He didn’t shed a tear when he said it, however. It’s not clear if he did when he saw his second baseman Ashleigh Hughes rush to hug her brother, Senior Airman Raynard Hughes Jr., after not seeing him for nearly three years. 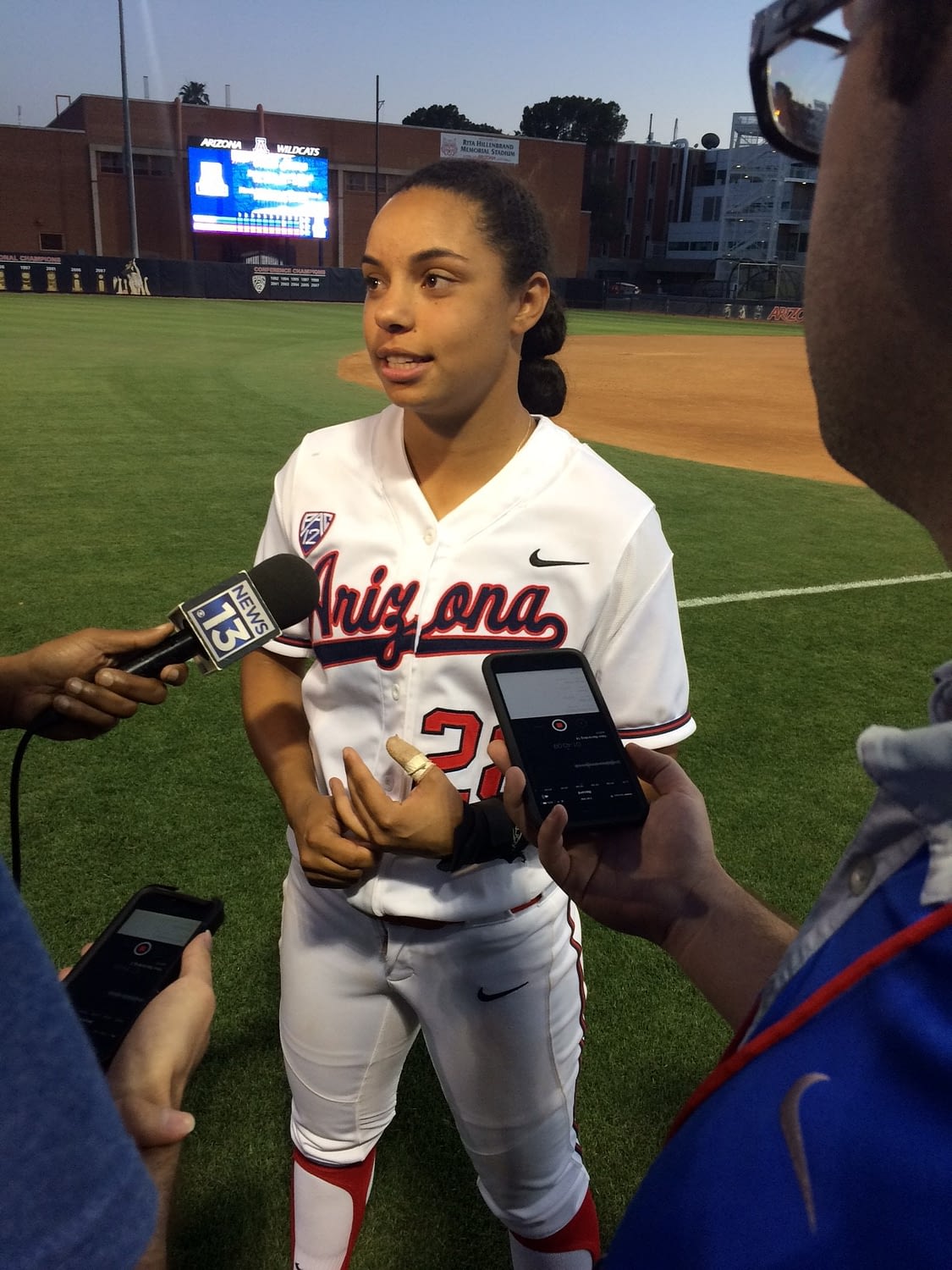 Ashleigh Hughes speaks about being surprised by her brother, Senior Airman Raynard Hughes Jr., who threw out the first pitch.

“It was such a surprise, everyone played me,” Hughes said. “I had no idea (it was going to happen). I was over emotion and happy.”

But she said, “I told myself don’t cry dang it. You suck those tears back in. I’m not going to cry. I was high on emotions. It was cool.”

It brought tears to O’Toole – and perhaps others who knew it was going to happen – and Candrea was in on it in part because he’s “a softie” when it comes to things like that.

“I don’t think we do enough for them,” he said, referring to military people returning. “It’s a hell of a lot bigger than this game.”

And this game was B-I-G.

“Good to be on the winning side of it,” Candrea said.

Arizona benefitted from a first-inning error by the Ducks which gave UA an early 1-0 lead. Then there was Mauga’s homer before a standing-room-only crowd.

“Everyone talks about her home runs but she’s grown up so much with just her approach to this game,” Candrea said. “She’s become a better teammate. She’s done the little things and that’s what has made me proud. That home run she hit tonight was because of her keeping her head screwed on. She’s not trying to do too much. She made adjustments to the game.”

Candrea said that will have to continue because “Oregon is not going to go away.”

Mike Candrea discusses UA’s 2-0 win over No. 6 Oregon for its 44th win this season.

Mauga said UA will be ready, as she will especially after a night her memories might be of the game she had and Arizona’s 44th win.

“It was a great win. We just need to come out stronger,” she said, about Game 2 on Saturday. “Tomorrow is going to be more exciting than this game because it’ll be a big game to win.”