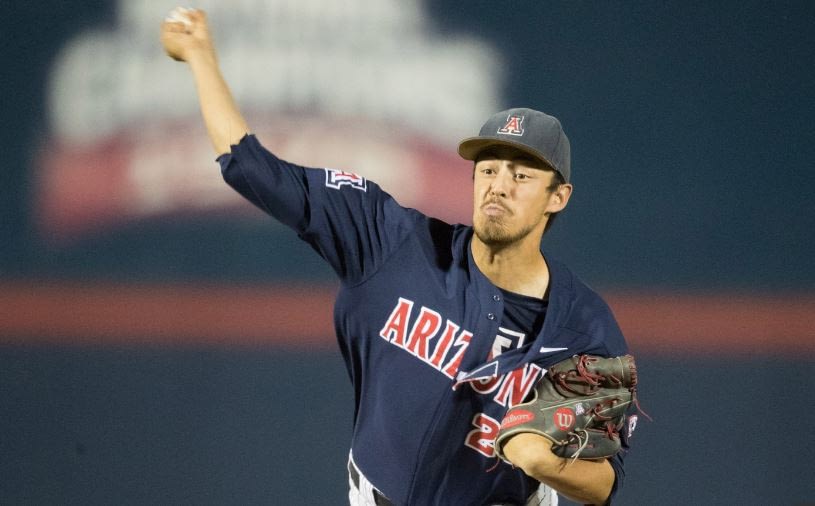 Arizona baseball is still facing a personnel issue within its pitching staff 38 games into the season, but it found a bright spot within the dyed golden streaks of Robby Medel’s hair.

The Wildcats (26-12, 9-9 Pac-12) were swept at home this weekend by Utah after previously suffering only one defeat this season at Hi Corbett Field. They gave up 23 runs to the Utes over the three games, but none were earned off Medel.

The redshirt junior began his Arizona career in the starting rotation, starting eight games in 2015 before being moved to the bullpen. Last season, he appeared in just 12 games, throwing 17 1/3 innings, although he pitched two scoreless innings against Louisiana-Lafayette in the playoffs.

Against Utah, coach Jay Johnson was searching for something to spark the pitching staff. He looked to Medel for an answer.

“I remember thinking, ‘I have a guy who started and threw 65 innings’ and was hopeful that he would be able to do those types of things,” Johnson said.

Out of the bullpen, Medel had scoreless outings in the series opener on Thursday and its conclusion on Saturday. In six innings pitched, Medel gave up seven hits, struck out four and walked two.

The right-hander had pitched only 8 2/3 innings all season before the Utah series. He lowered his season ERA to 1.23.

“I think he just pitched with conviction and I think the most telling thing to me was, a few of his teammates noticing it, the previous outings prior to tonight,” Johnson said. “This guy’s going to compete for us and it was great to see that.”

Medel believes that, at this point in his career, an outing without conviction is an outing wasted.

“I’m old, man,” the 22-year-old joked after Saturday night’s loss. “Every time I touch that mound, or any mound in the Pac, or in the country, I cherish it, dude. Because I don’t know how many times I’m going to get to do it going forward.

“I don’t wanna look back when I’m 34 like, ‘Man, if I would’ve thrown that one pitch against Utah with a little more conviction, a little more intent, man … maybe I’d still be playing baseball.’”

During fall ball, Medel highlighted these kind of performances as his goal for the season: “I want to be more confident, have more intent with my pitches and allow my confidence and my intent to guide me in tough situations, and to not fall back, but keep on pushing forward.”

Against Utah, the team fell short, but Medel succeeded.

But it’s not all about himself. Medel wants to take the stress out of the game for his teammates when he’s on the mound and in the dugout.

“Personally, I don’t take very many things in life seriously,” Johnson said, but “this deal is a life-and-death deal in terms of how I take it. I think our players care an extreme amount.”

So, when his teammates tense up during high-pressure situations, Medel eases the tension through dugout antics. Last year, he used water and a towel as the tools for devious actions. Thursday night, Medel was back to work with a pair of jeans pulled over his head as he whipped his arms about his teammates.

So apparently this is a thing now. 👖 pic.twitter.com/Mx4PJiGIB6

“We have some really serious guys on the team,” Medel said. “It’s a balance. You’ve got to have balance. We have our serious time and we also have time to unwind.”

For now, the Wildcats are grinding through a rough patch in their season, so Medel must be prepared to leave his dugout fun and be thrown in the game at any point. He said he’s up to the challenge.

Johnson said Medel is a front-runner in terms of performance following the Utah series. The coach assured with conviction of his own: “He’s going to be in the game a lot. He’ll be a part of what we’re doing.”

What they’re doing will resume Tuesday against New Mexico State. All eyes will be on Johnson’s management of the pitching staff.