One of 100 ESPN employees laid off Wednesday, Ed Werder, who joined the network in 1998 as a Dallas-based bureau reporter, started his reporting career with The Arizona Daily Star in 1983.

He was in Tucson briefly, until early 1984, after earning his journalism degree at the University of Northern Colorado in 1982. He left the Star to cover the Denver Broncos for the Boulder (Colo.) Daily Camera.

While with the Star, he was a general assignment reporter who helped cover the Cleveland Indians’ spring training and the Tucson Toros. He also worked on the copy desk as an editor. 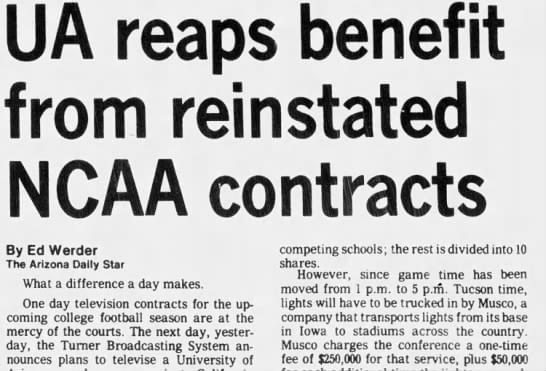 Werder, who turns 57 on May 3, was one of the most significant cuts made by ESPN on Wednesday after the network reportedly has lost nearly $1 billion because of declining cable TV subscribers in this day and age of live streaming.

After 17 years reporting on #NFL, I've been informed that I'm being laid off by ESPN effective immediately. I have no plans to retire

In 2015, it was chronicled that Werder’s daughter Christie and son-in-law Trey Bomar each battled cancer. Christie’s cancer — she had a brain tumor — is in remission and she resides near Dallas. Trey unfortunately passed two years ago.

Werder’s layoff from ESPN was met with sadness from viewers, colleagues and athletes.

Disappointing news Ed Werder is leaving ESPN☹️ one of the 3 amigos…Berman,Mort and Ed. Great guys and much respect

Worked alongside @Edwerderespn during the Cowboys' best years. I could write faster but that was it. I could not outwork him. Still can't…

Departure of Ed Werder from ESPN becomes a sad day for quality sports journalism. Always respected his work and integrity.