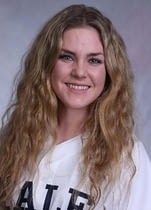 Yale leadoff hitter Shelby Kennedy (Cienega) was named to the Ivy League Honor Roll this past week. According to a news release, Kennedy was all over the bases in six games last week. She had five hits, drew five walks and stole three bases.

The Bulldogs (8-8) enter the final weekend of Ivy play two games behind first-place Dartmouth (10-6). Harvard sits at 9-6 and will play a make-up game at Brown on Thursday. Yale has doubleheaders with Brown on Saturday and Sunday, while Dartmouth and Harvard meet in a four-game series.

The John Olerud Two-Way Player of the Year goes to the top player in the nation that both contributes on the mound (with at least 20 innings pitched or six saves) and at the plate. Gonzalez is hitting .358 with four home runs, two triples, 15 doubles, 24 RBI, 38 runs, 10 stolen bases, a .563 slugging percentage and a .479 on-base percentage while also playing a strong center field for the Lobos. On the mound, the left-hander Gonzalez is 3-2 with a 3.86 ERA in six starts (32.2 innings) with 19 strikeouts and nine walks. The junior is one of 25 players named on the watch list – and the only player from the Mountain West.

Robles had a banner day on the mound and at the plate on Saturday. The right-hander notched a victory after limiting UT Martin to four runs over six innings. He did not allow a walk to the 27 batters he faced while striking out six batters. Meanwhile, he became the first Govs hitter to hit for the cycle since 2005 while going 5-for-5 with two RBI at the plate.