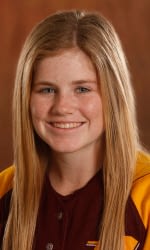 Curtis, a sophomore outfielder from Salpointe, ranks second in the MAC with a .394 batting average. Among her 63 hits are 10 doubles, a league-best five triples and one home run. She also has 20 RBI, scored 39 runs, and was caught stealing just twice in 12 attempts.

Last spring, Curtis was an All-MAC First Team selection and was named to the league’s all-freshman squad.

The Lawrence R. Toledo Leadership Award is presented to student/athletes, who show leadership development through excellence in academic and athletic participation. The award is presented in honor of Larry Toledo, Pima’s first Athletic Director.

Peterson, a sophomore guard/forward, played two years on the women’s basketball team. She helped the Aztecs to a second place finish at the Region I, Division II tournament. She majored in medical biology at the University of Arizona but fell one art class short of graduation so she decided to take a transferable class at Pima. She talked with her club coach Chris Klassen and got in touch with Holthaus about joining the team.

After playing a few weeks in open gym, Peterson was offered a scholarship. She took classes that sparked her interest and maintained a 4.0 GPA. She tutored her teammates in psychology,
chemistry and math and volunteered with her teammates at various organizations. Peterson wants to apply to medical school while volunteering at clinics. Her interests are Pediatrics, Adaptive Sports Medicine and Oncology.