Mike Candrea thought, and well, thought … but he couldn’t remember when was the last time he had a team like he has now.

“You’re asking me to go back in time … but it’s been a long time,” he said on Sunday afternoon as the sun was setting but giving life for another weekend of softball. 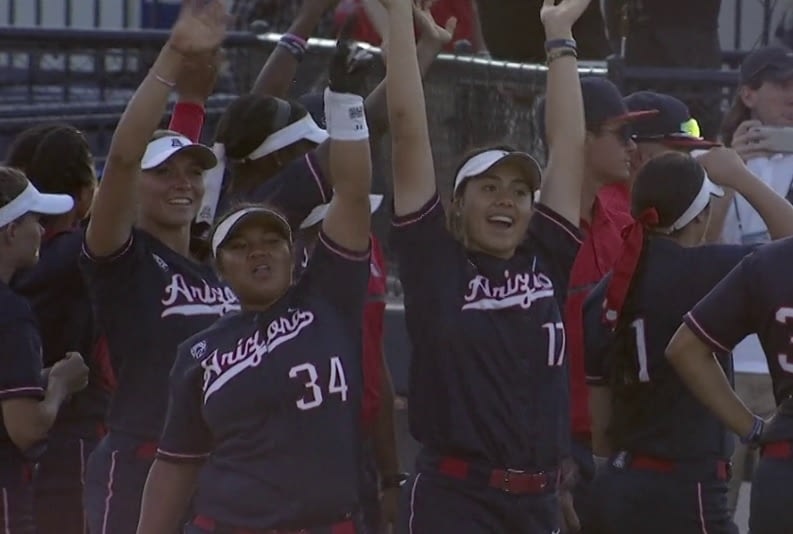 No. 2 Arizona had just dismantled South Carolina for the second time in as many days, beating the Gamecocks 9-0 at Hillenbrand to advance and host next week’s Super Regional with Baylor.

But those in the know and who have been there before will say it has a feel of a title time.

Let the good times roll on.

But, yes, it’s been that long since Arizona looked this good, while bringing back memories of championship teams of Arizona teams past.

It has strong hitting (long game and short), defense, speed and pitching.

Arizona backup pitcher Taylor McQuillin threw a shutout, getting out of jams like a cagey veteran.

While she was keeping South Carolina silent, even while living on the edge, her teammates were running and stunning on the bases.

Yes, Arizona was/is that good and proved it this weekend.

“This is a very good team,” Candrea later said. “I think they have all the pieces. All we have to do is go out and perform. The thing that I was ecstatic about was that we created runs. I don’t think that anyone was expecting that from Arizona. They were looking for us to hit home runs, to live and die with the home runs. This weekend we showed ourselves we can score in many different ways.”

What a tool to have at this time of year. UA has home runs, singles, doubles, moving runners, slapping, running … everything.

“Their slappers and short game was what really won the game for them,” said South Carolina coach Beverly Smith said. “They were tough outs. Their speed game puts some pressure on you and their home run hitter (Katiyana Mauga) puts pressure on you. She’s a threat every time she comes to the plate.

“But it’s the constant pressure of Arizona’s offense that makes them so tough.”

She was so adamant about it she said it twice.

Arizona’s four-run sixth inning showed exactly what Arizona is about. They slapped and punched and were as aggressive as ever. The bottom of the line up was active and aggressive. They combined for seven hits for the game and four RBI.

They had nearly half of Arizona’s overall 15 hits, the most in a game since April 7 when it had 20 against a not-so-good Stanford.

Arizona was so good and played so well, Candrea – in addition to no knowing when he last had a team like this – couldn’t believe the team he was coaching.

“We look like a different team right now,” he said. “We went from a bunch of bashers to (having) a short game again. That’s what kind of happens in postseason.”

And, well, Candrea apparently does.