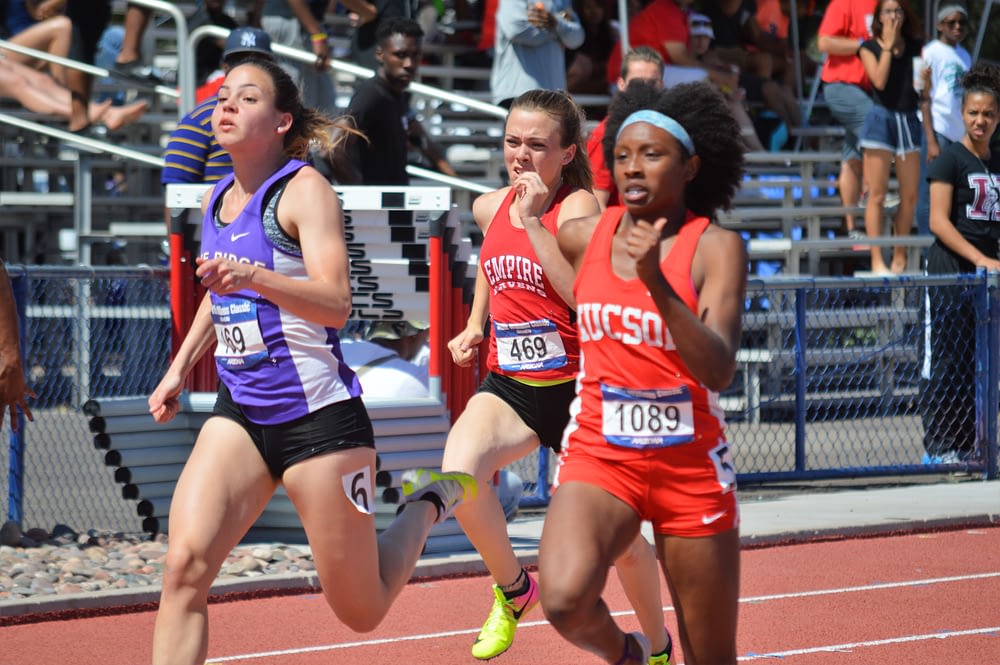 In between “naps” and “hugging opponents,” some track & field athletes actually run, but only for fun. (Andy Morales/AllSportsTucson.com)

According to the short and uninformative (no surprise) bio attached to his ramblings on the Lancasteronline.com website, Mike Gross covers Penn State football.

Yet, If I may, he covers so much more. Like a gleeful morning show host, Gross writes about the “softening and weakening of our culture,” “relaxed fun,” “high-pressure frisbee golf,” “stretching and limbering” and even “napping.”

One would think his bio would be more informative and intense. I think he needs a public relations intern to jazz his bio up a bit because, by his own admission, he writes about football, “…the most intense, high-pressure American sport.”

In fact, that is how he began one of his recent columns on the far superior sport:

“Football, to which This Space devotes most of its year, is the most intense, high-pressure American sport.

Track and field, to which we devote three pleasant weekends each spring, is every bit as intense and high-pressure as frisbee golf.”

One would think a rational writer would chuckle to himself a little but would then hit the “Backspace” key a few dozen times and start over. But Gross, like a number of columnists, not only sees football as being superior to all other sports (especially those where girls take part), he wants his readers to know he will write about it year round at the expense of other sports.

I’m not sure if the number of reporters who agree with Gross is increasing or decreasing but I’m pretty sure the number of parents with kids who play and compete in volleyball, softball, golf, tennis, cross country, track and field and soccer are not only increasing in size, they are increasing in awareness.

And parents of female athletes? Beware of them at all costs.

Forget about the football only crowd, I’ve had reporters scoff in my presence at the idea of covering girls period, regardless of the sport. I’ve received emails asking me why I’m “wasting my time” covering a girl’s sport or even outright attacking players by name because they happen to compete at a “small school” and shouldn’t get any sort of recognition. The horror.

By now, those email writers have learned I will publish their emails, knowing one day they will have to sit in the stands next to a mom of an athlete of a “lesser” sport. And, every sane sports writer I know, would never ridicule a sport or an athlete in print.

Also, many high school sites devote their space to football only reporting just as there are a few incredible track & field only sites. Those are all fine examples of reporters promoting their sport, but never at the expense of another sport.

But, getting back to the great Mike Gross. He covers Penn State football after all.

It’s the kind of apology one writes when one is forced or when one, well, when one just can’t say, “I was wrong. I’m sorry.”

No, Gross had to mention he “volunteered” to cover track and field.

He mentioned how inadequate he would be if he had to compete by offering:

“I could not beat Nathan Henderson in a race if I had a bicycle and he wore a fat suit. I could not throw a shot put out of my shadow or jump over it.”

He said his apology was not one those, “non-apology apologies.”

Sincere apologies do not come with qualifiers.

Mike Gross can be contacted HERE

HERE is a response to Mike Gross from Xavier athlete Sarah Carter.