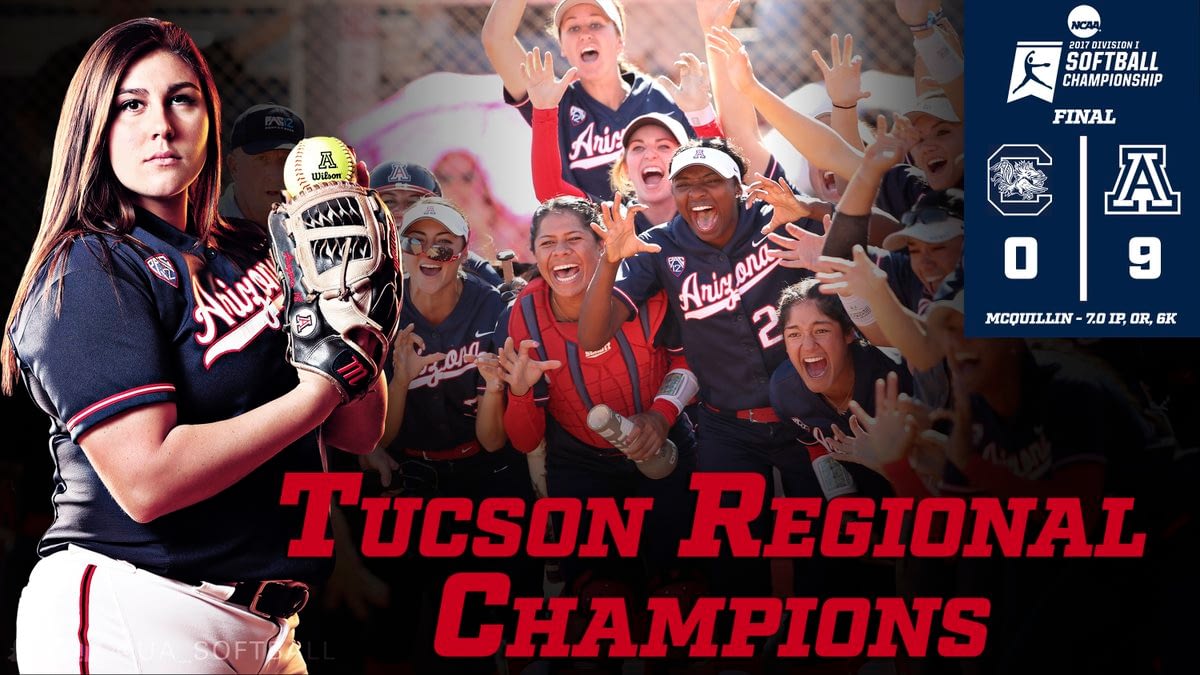 Arizona used both of its top pitchers in a run-rule victory over New Mexico State to start an NCAA regional Friday night, prompting this response from the Aggies:

“They hit every zone and I feel they attack the zone,” New Mexico State center fielder Victoria Castro said of Arizona’s pitchers. “There’s no pitch they take off. They attack the hitters.”

“(Iveson) said, ‘This is a proud coaching moment for me because I haven’t heard this in a while,'” McQuillin said.

The sophomore said she took the quote to heart and then put it into practice Sunday, when she capped the NCAA regional by scattering seven hits in a 9-0 victory over South Carolina. She struck out six and walked one.

The left-handed McQuillin pitched nine scoreless innings in the regional with 12 strikeouts, after a rough ending to her regular season.

“Coming into the postseason, I told myself that I had to kind of recreate who I was as a pitcher and kind of become my new self,” she said.

“Nobody is going to not know who you are anymore. So, I think that coming out I had to tell myself, this is what I need to do to get the job done.

“I need to locate pitches on both sides of the plate, don’t be afraid to throw inside to right-handed batters and just kind of attack, attack, attack, instead of kind of staying away. It was one of the keys today in this game, staying on top, getting strikes in good counts, working out of jams.”

While O’Toole — the Pac-12 Pitcher of the Year — will get the majority of the innings moving forward, McQuillin will be needed at some point, or points, along the way if this turns into a long run through the Women’s College World Series.

Arizona will try to take another step in that direction when it plays host to Baylor in a best-of-three Super Regional this weekend.

“I don’t think there are a lot of people who have the luxury of having two quality pitchers,” UA coach Mike Candrea said.

“I thought it was big today for Taylor to take care of business in a big game. And I have seen her do it. She has won at all levels. … It was fun today to see her work the inside pitch against righties. I think she’s getting a little bit smarter as she is getting older.”

RELATED STORY: Mike Candrea: Arizona ‘has all the pieces’

McQuillin often worked out of trouble against South Carolina.

In the fourth, Arizona got out of the inning after South Carolina had runners on first and third with two outs. UA shortstop Mo Mercado ranged to her left to pick up a bouncer and throw our Kamryn Watts at first.

And then she preserved the shutout in the seventh after a one-out single and a hit batter. McQuillin got a foul pop-up to first base and a grounder to short to end it.

“Taylor threw a great game today,” Candrea said. “At this time of the year, you have to have the pitching.”

Stat of the weekend for @UA_Softball? Cats are only team to not allow a run during NCAA Regionals. #BearDown