The first time I listened to Danielle O’Toole I was taken aback as much as I was impressed. And, well, I don’t know exactly why.

Here was this star pitcher speaking to the media and being very candid, straight forward and also giving facial expressions to go with he comments. It was refreshing and yet different, given today’s climate of saying all the right things. 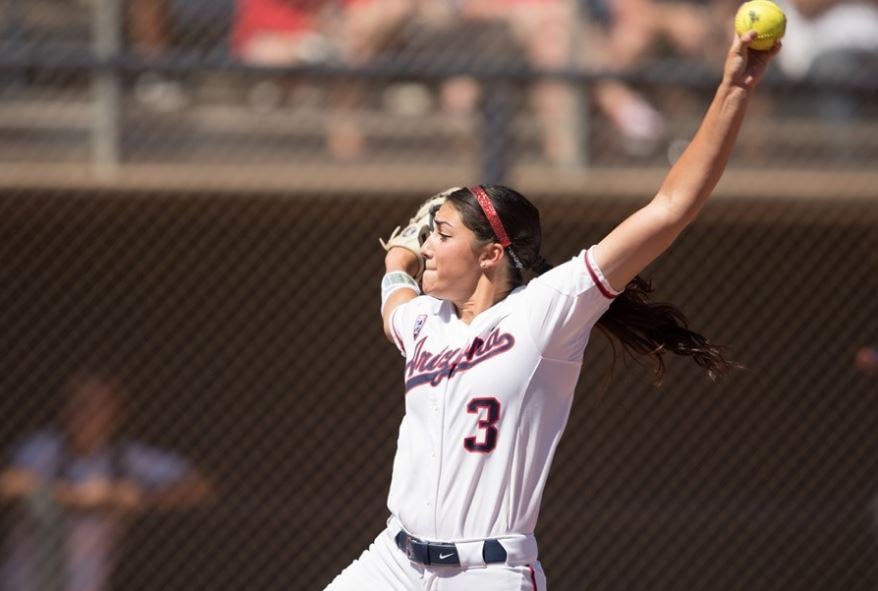 And not that she didn’t say the right things – or wasn’t politically correct – but it was how she said it. It was the tone, the sarcasm, the bluntness all the while being insightful.

Even though she’s a senior she was, well, beyond her years as a college student.

“I’m not shy about anything,” she said, this week as her team prepares to play Baylor in the Super Regionals here in Tucson. “I don’t think people are like that anymore. It’s not a bad thing. I don’t shy away from who I am as a person.”

As her teammate Taylor McQuillin said, “She’s a little weird, but a kind-of-good weird.”

That’s kind of the consensus with those who know her.

O’Toole at Hillenbrand talks to the media.

“She embraces it,” said Dejah Mulipola, the team’s catcher. “I don’t know how to explain it. Nobody does.”

Heck, just recently she started making her own soap, some bacon, orange peels and this and that.

Sometimes she’ll dance just to dance, Mulipola said, but “sometimes we start dancing with her.”

And there are other things.

Mulipola said she remembers the first time she met O’Toole and it was bizarre. Without ever talking or really meeting, O’Toole called Mulipola ‘her best friend” while the two played catch in the bullpen,

“I didn’t know her personally right off the bat and she kind of came at me with her weirdness,” Mulipola said. “I said, ‘I’ll embrace it.’”

How can you not? O’Toole is almost contagious and she’s a winner. She’s gone 29-4 overall and has a 1.05 earned run average.

They all had what coach Mike Candrea said was talent, were all competitive and were all calm, cool and collected on the mound.

And, well, O’Toole has all that, too.

“I think O’Toole (has it) and Taylor is going to have it,” he said. “Taylor is getting close to it. She’s made great strides. Toolie has that intangible of high softball IQ, good talent, emotional stability, competitive, smart … you look at any great pitcher and you’re going to have a little bit of all that stuff.

When asked about the pitchers before her who found success, O’Toole said, “I don’t’ want to sit here and compare myself to them because they have done amazing things. They’ve been people I’ve looked up to. (But) I do think I posses a quality that will not only get me somewhere but get this team somewhere it’s been want to go for a while.”

That would be Oklahoma City for the World Series. Candrea hopes so, having not been there since 2010 when it was the NCAA runner-up.

It’s likely O’Toole will be a catalyst to get there.

He also smiles when asked how O’Toole is when not on the field.

“She’s different,” he said, kind of knowing where the question is going. “She’s just a fun person. She’s someone you enjoy being around. She’s funny and can laugh at herself. And she can get serious – (he claps) – that quickly.

“It’s kind of unique to watch some of the stuff she does or says. She’s a great personality that knows how to flip the switch.”

And knows when to become the serious, take-it-to-the-batter pitcher.

“She’s very competitive,” Mulipola said. “She fires me up. She knows when it’s game time and knows when to get going.”

She admitted to being very competitive, but says she’s not as intense as the TV cameras show her while on the mound. It’s that intense, stoic look.

“I don’t mean to have this look on my face because if you know me and those that do know I’m not like that,” she said.

It’s helped her become the Pac-12 Conference’s pitcher of the year. So, the method to her madness, er, weirdness has paid off.

“You want to become great and do great things,” she said when asked if she expected this kind of season. “You set high goals. I wouldn’t have gotten anywhere near if it hadn’t been for everyone else. I preach team and I do that for a reason.”