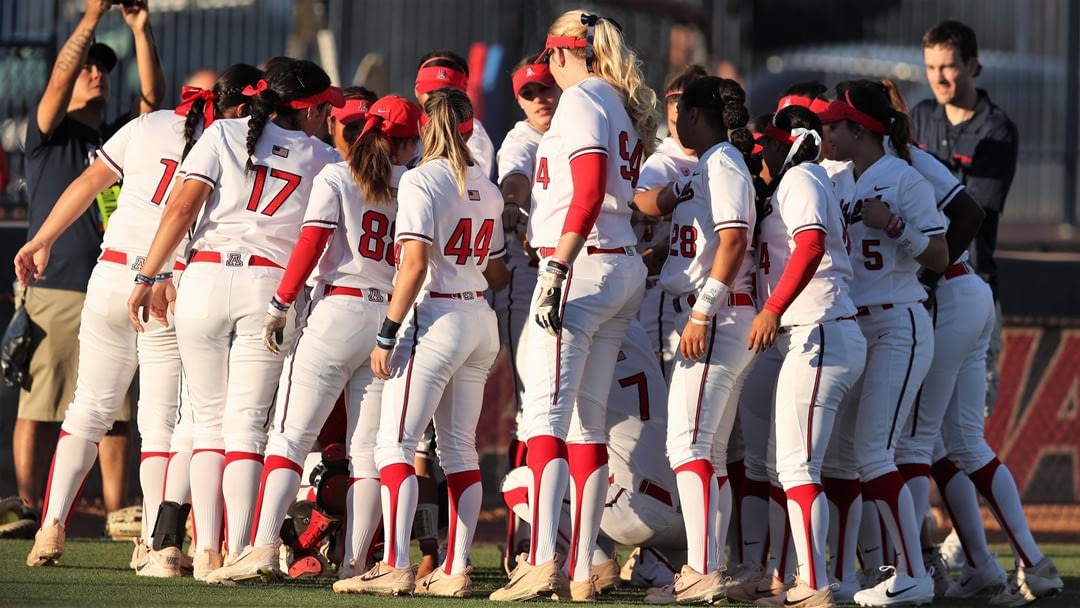 As fans began to file out of Hillenbrand Stadium on Saturday night, one was heard to say, “It wasn’t supposed to be like this.”

Arizona’s softball stadium was ready to party like it hasn’t since 2010, with the Wildcats rallying to take a 4-2 lead over Baylor in the second game of a best-of-three Super Regional.

Six outs away. Then five, as starter Taylor McQuillin got the first out of the bottom of the sixth. And then … uh, hold off on the celebration.

Baylor rallied for four runs in the sixth inning — getting four hits off Arizona ace Danielle O’Toole, who entered in relief — to win 6-4 and force the rubber match Sunday at 4 p.m. The winner advances to the Women’s College World Series in Oklahoma City, a destination that has eluded the Wildcats since 2010.

There was a time when Arizona — which won eight national titles between 1991 and 2007 — was pre-destined to make it to the Series. But not anymore, not even with the being the No. 2 seed in the tournament. There are just too many good teams across the country now to think about it being a cakewalk.

“There is a hell of a lot of parity in the country. We know that,” coach Mike Candrea said.

“Like I told the kids, ‘Nothing is going to come easy. You’ve got to earn your way tomorrow.’ We need to get up, have a good breakfast and come in here and get ourselves ready to go out and battle, compete, do what we’ve done all year.”

Baylor kept their season alive for another day through two RBI’s, while Kelsee Selman closed it out for a complete game! pic.twitter.com/6rBkINLgZe

O’Toole (30-5) entered after McQuillin gave up a one-out double. Shelby McGlaun followed with a swinging bunt that was good for an infield single. O’Toole struck out the next battle to nearly get out of trouble, but Jessie Scroggins hit a chopper to shortstop that Mo Mercado had no chance to make a play on as a run scored.

Sydney Christensen, sitting on O’Toole’s change-up, ripped a double down the left-field line to tie the game. Taylor Ellis gave the Bears the lead with a double that fell into between left fielder Mandie Perez and center fielder Eva Watson.

O’Toole got the victory in a 3-2 Arizona win on Friday night, but the Bears said they were intent on being more patient, looking for her change-up, which is one of the best in the country. That strategy will be something for the Wildcats to consider Sunday when O’Toole is back in the circle.

“It’s kind of hard at this stage of the game to change what you do, but I’m sure we’ll make some subtle changes,” Candrea said. “It’s really tough sometimes when you see a kid look really bad on an off-speed pitch to not throw it again.”

Maddison Kettler hit a two-out single to right field, with pinch-runner Riley Browder originally stopping at second before breaking to third. The throw came in to Mercado, who tried to catch Kettler off first base. Her throw went awry, allowing Kettler to get to second.

That was important, because Scroggins followed with a single up the middle that drove in Browder. When center fielder Eva Watson failed to field the ball cleanly, Kettler motored home, too.

Arizona tied the game in the top of the fifth. Perez led off by beating out a chopper to shortstop. Katiyana Mauga walked and both runners moved up on a throwing error to second by the catcher. With one out, Jessie Harper drove a pitch the opposite way high off the right field fence to drive in two runs.

The Cats took the lead in the top of the sixth with the help of a passed ball that allowed Reyno Carranco to get to second with two outs. Perez followed with a blooper up the middle just beyond the reach of diving second baseman Ari Hawkins.

After Mauga was intentionally walked for the third time, Mercado’s single drove in Perez for a 4-2 lead.

.@UA_Softball has a 4-2 lead heading to the bottom of the 6th. The Wildcats are pumped! pic.twitter.com/74LF8cCEw4

But the Wildcats failed to hold the lead and will put the season on the line Sunday. Don’t expect Mauga — second in NCAA history with 92 home runs — to have much of a chance to do something.

“Is it frustrating? Yeah,” Candrea said of the intentional walks. “But did I kind of understand what they were doing? Yeah. …

“It will probably happen again tomorrow. She probably won’t see another pitch.”

This has been Arizona’s best season since 2010. The Wildcats won the Pac-12 title. They are 52-8. They — and the fans at Hillenbrand — are really ready to party.

“I think we’re going to come out and have a dogfight tomorrow, just like we have the past two games,” McQuillin said.

“Just because we fell short today, I don’t think we’re any less prepared for tomorrow. … Tomorrow is a brand new day to wake up and play Arizona softball.”