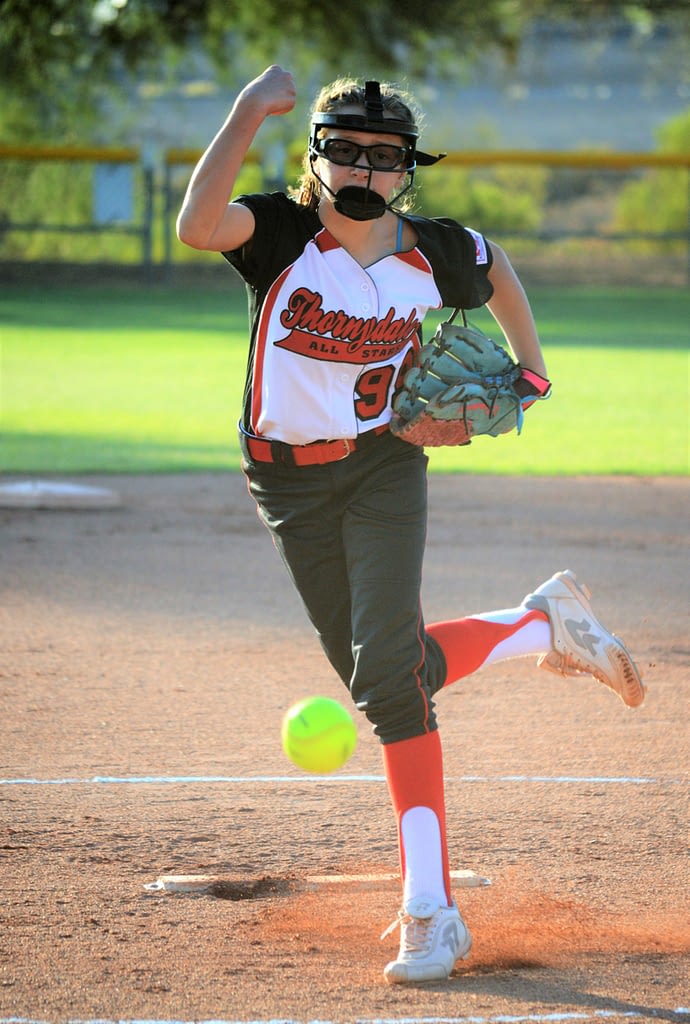 Thornydale defeated Tucson Mountain 12-2 in the 9-10 softball championship game Friday night and the team from the Marana area will travel to Litchfield Park on July 17 to take part in the state tournament.

Thornydale also defeated Tucson Mountain 13-3 in the Little League softball championship game. Thornydale will advance to the state tournament to be held at Old McQueen Park in Gilbert starting July 5.

The 9-11 Thornydale softball team will host the state tournament for that age group at Arthur Park starting on July 10.

Thornydale and Tucson Mountain will square off against each other one more time in Junior Softball action on Monday, June 26 in a best-of-three series.

The Thornydale Little League team went 3-0 as it cruised through bracket play, outscoring opponents 43-4, but the championship game against Tucson Mountain Friday night was close through the first three innings of action.

Thornydale scored two in the bottom of the first with Clarissa Figueroa bringing in Mia Gutierrez to start the scoring off but Tucson Mountain tied the game up in the top of the second after loading the bases on three straight walks with no outs.

Destanee Nez recovered and collected two straight strikeouts but Maya Jones picked up an infield single to score Mikayla Sneyd. Joleena Herrera scored on an error on the next batter to tie the game up.

Thornydale got the two runs back in the bottom of the second with Nez and Deborah Wallace collecting RBIs. Tucson Mountain plated a run in the top of the third to cut the lead down to 4-3 thanks to a triple from Angelique Ochoa and an RBI double from Sneyd.

Thornydale slowly pulled away by scoring three in the bottom of the third, fourth and fifth innings for the 13-3 win.

For Tucson Mountain, Jones went 2-3, Vanity Valles picked up a hit as did Melina Morales (no relation). Ochoa had the triple and Sneyd the double. Morales and Bailey Grubbs both saw pitching action.

Nez led Thornydale with eight strikeouts and Lora Ormsby added three more after taking over in the circle in the fourth inning.

Wallace went 2-3 and Talia Martin, Figueroa, Ormsby, Bella Beauchamp, Caelen Beatty, Emma Kelly and Nez all had singles in the game for Thornydale.