Tucson Turf, which prides itself as being a team without superstars, took home the Pylon Elite 7v7 Nationals title on Sunday, beating Midwest BOOM 35-21 in Arlington, Texas.

Teon Simmons scored three touchdowns for Tucson, which was also led by Mario Padilla, a standout junior running back at Salpointe Catholic.

Former Arizona Wildcats receiver Syndric Steptoe is an assistant coach with the Turf. 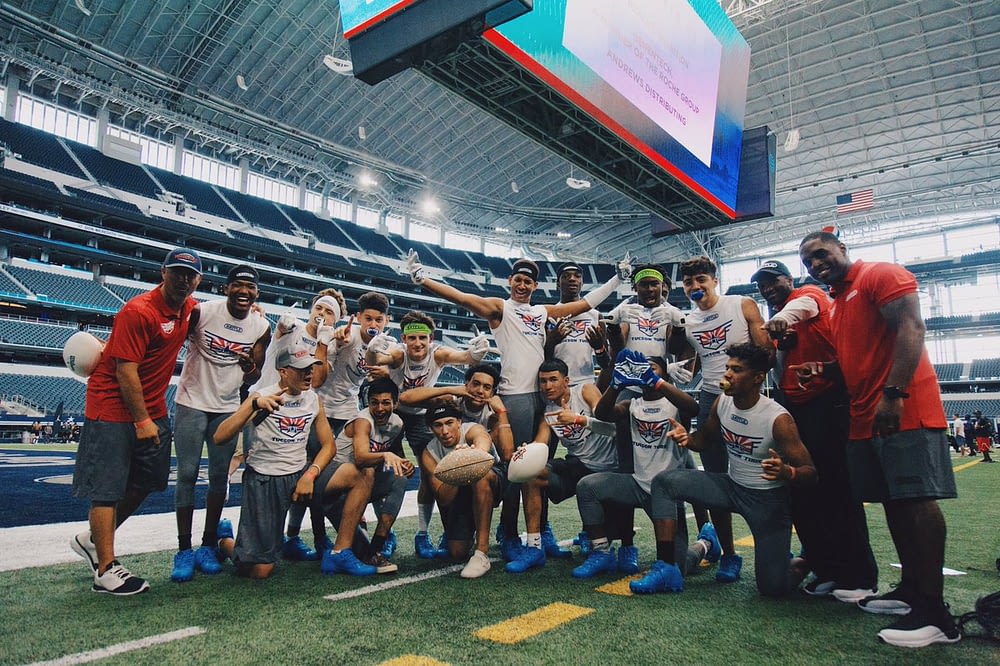 About 80 percent of the Turf includes players from Marana High School who are more team-first than consumed with individual agendas.

“We’re trying to do it differently and we want people to understand we’re keeping it a game,” Tucson Turf coach Toby Bourguet told USA Today. “We’re doing this with kids who play the game because they enjoy it, understand the opportunity in front of them and are doing it to make memories. They’re not chasing scholarships. They’re out here having fun.

“We’re from a small town and we don’t come from money. Most of these guys know each other since they were little, little kids playing at the park. This shows you can compete at the highest level in today’s environment and still do it with character and integrity. It’s a neat thing.”

Bourget acknowledged that “none of our kids are rated as a one star or two or three … We are very, very unlikely champions.”

Bourget’s son, quarterback Trenton Bourget, had a prolific passing performance during the tournament. He also had an interception while on defense during the national title game.

Trenton, who will be a junior at Marana, has lost only four games in four years in 7v7 competition. He has been part of five natinonal titles for Turf.

“We’re used to being doubted and laughed at,” Trenton told USA Today. “No offers, or rankings. But you know what? We stick together and not get down on each other. We are there for each other even if bad things happen. And we let the score do the talking.”

Steptoe posted this comment on his Facebook page: “Can’t say enough about the performance these young men put on today against the top football D1 talent in the country! We’re continuing to build young men of character through the game of football. We did it! Thanks to all of our sponsors.”

Here are many social media reactions to the Turf’s title:

No stars. All heart.