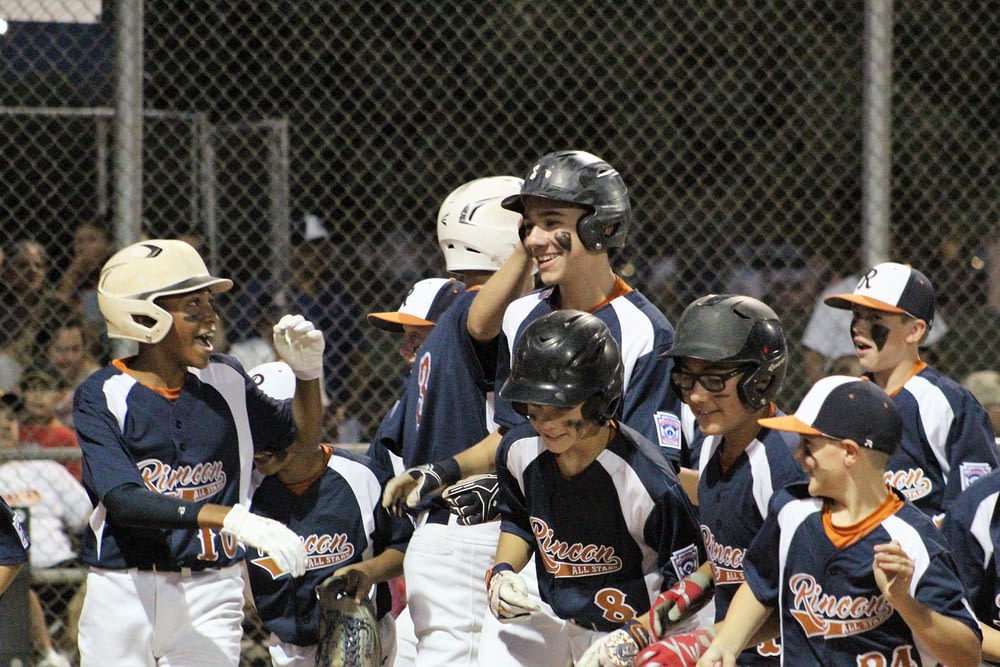 Matt Altherr (tall boy) is greeted at home after blasting his 3-RBI home run in the first inning. (Andy Morales/AllSportsTucson.com)

Rincon hit eight home runs in the game with Brady Carson and Isaiah Jackson hitting two each (one was a grand slam). River Ries, Christian Cruz, Matt Altherr and Luis Arenas hit the other four shots. Ethan McHolm went 4-for-4 with a triple and a double. Altherr, Arenas and Isaiah Higuera had doubles. McHolm had seven strikeouts and only gave up one hit in three innings of work. Matt Fallwell picked up an RBI single for San Xavier.

Sunnyside beat Sunnyside Copper Hills 20-10 in the 50/70 Intermediate Championship held at Vista del Prado Park. District 8 (Nogales) is hosting the 50/70 state tournament. Sunnyside will play at 5 p.m. on Thursday, July 6 against the District 6 representative and Western will take on Nogales at the same time.

Western beat Oro Valley 9-3 in 9-11 baseball action held at Kreigh Park. Western has to beat CDO twice to win the championship. CDO beat Western 11-9 last Wednesday in the final of the “B” Bracket.

Oro Valley beat Tucson Mountain 11-1 to advance to the Little League Baseball championship series against Western tonight at Mehl Park. Western beat Oro Valley 11-0 in the first round way back on June 19. Oro Valley has battled back, winning five elimination games to get to the championship.