Fox and Martinez are two of 33 former Arizona athletes who are a head coach.

Fox was the head coach at Texas-Arlington from 2012 before leaving to head the Running Rebels’ program.

Thank you @UTAMavsAD for taking a chance five years ago on a young coach and helping me learn and grow in this business.

So overwhelmed by the outpouring of love and support today! #gorebs

Eight former Arizona players who excelled under Candrea are now head coaches either in college or high school.

One other former player who became a coach, Leticia Pineda-Boutté, who played at Arizona from 1995-98, resigned last May after 11 seasons at Washington-St. Louis.

Kristie Fox is in the middle of this photo with Caitlin Lowe on the left and Chelsie Mesa on the right, celebrating the 2006 NCAA title.

Fox, Debby Day and Martinez coach at the college level. Day, who played at Arizona from 1989-91, has coached Cal-Lutheran since 2002. Martinez, with Arizona in 2008 as a redshirt and 2009 as a senior after transferring from Cal State Dominguez Hills, starts her position at Abraham Baldwin Agricultural College on Aug. 1. 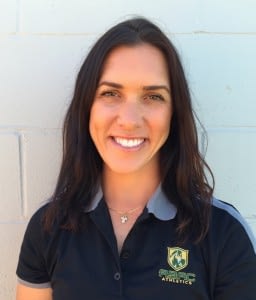 “I am so beyond excited for this opportunity,” Martinez said in a press release. “I have been dreaming of being a head coach my entire life.

“I want to remind the players that they are not too old to be students of the game. I don’t know everything about the sport, and I’m still learning alongside them. This will be a year of growth and figuring out ways to keep them motivated and engaged in the game. I know every coach’s goal is to win but I also want to make it fun for my team and help them to remember why they play.”