Arizona’s season opener against NAU at Arizona Stadium on Sept. 2 is 36 days away. To go along with the countdown to kickoff, this site will publish the Top 50 games in Wildcat football history.

WHY IT MADE THE LIST: Arizona fans and its players on the 1983 and 1993 teams must have really enjoyed this one in Tucson. Those were the years Cal rallied at home to force the Wildcats off the road toward a prosperous finish, including a trip to the Rose Bowl. This was Arizona’s turn to derail the Golden Bears, who had a BCS title and Rose Bowl appearance in their sight. 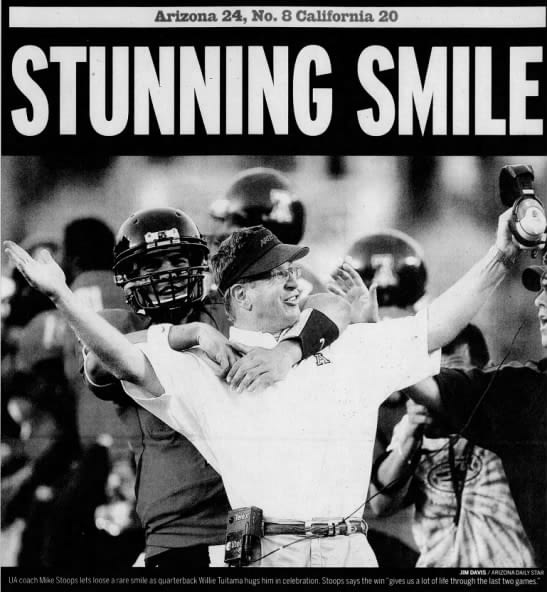 Arizona Daily Star clipping of Arizona’s upset of No. 8 California in 2006, Mike Stoops’ third season as the Wildcats’ coach.

The Golden Bears tied Arizona 33-33 in 1983 despite trailing 26-3 early in the second half. The UA was 4-0 and ranked No. 3 in the nation heading into that game. The Wildcats finished 7-3-1. Ten years later, Cal upended the UA — ironically by the same 24-20 score — effectively knocking the Cats (atop the Pac-10 at 5-1 entering the game) out of their most serious Rose Bowl run in the program’s history. Arizona finished the season with a 29-0 drubbing of Miami in the Fiesta Bowl, but a Rose Bowl trip would have been much sweeter.

California, on an eight-game winning streak after losing the season-opener at Tennessee, was 8-1 overall and 6-0 in the Pac-10 when it came to Tucson late in the 2006 season. A showdown for the Pac-10 title loomed a week later against USC for Cal but Arizona, 4-5 overall and 2-4 in the Pac-10, had other plans. The Wildcats, who upset No. 25 Washington State in Pullman a week prior, were shut out against the Golden Bears in the two previous meetings. They were outscored 66-0 in those games. Arizona coach Mike Stoops and the Wildcats ended their frustrations against Cal in front of a regional TV audience.

The hurt continued against USC a week later as Cal failed, losing to the Trojans 23-9, to clinch its first Rose Bowl berth since the 1958 season. For Arizona, the victory against Cal was another milestone on the road to respectability. The Wildcats won only three games each of the previous two years. They finished 2006 with a 6-6 record, their first non-losing season in seven years.

“Another one of those games where, out of the blue, Arizona knocked over a superior and highly ranked opponent. For once, luck was on Arizona’s side when Deshaun Jackson put his toe on the sideline making a catch on what looked like a late, game-winning touchdown. I remember the collective breath of UA fans being lost when Jackson made the catch right in front of the student section. And then the stadium gathering itself when the replay showed the tip of his shoe on the line.”

“It has been a long day, but it ended great,” Stoops told reporters. “People rushing the field at the end, that’s always a good sign.”

Most gratifying to Stoops was the way his team battled back from a 17-3 third-quarter deficit. The Wildcats managed the rally although they averaged only 13.8 points in their first nine games. Cal lost despite outgaining Arizona 356 yards to 262.

“The whole game was like plays going their way,” cornerback Daymeion Hughes told reporters. “I was like, ‘Man, this can’t be real.’ ”

The first one came midway through the first quarter, when a block-in-the-back penalty on receiver Lavelle Hawkins nullified tailback Marshawn Lynch’s 79-yard touchdown run. The ball was brought back to Arizona’s 33-yard line and the Bears had to settle for a field goal and a 10-3 lead. With Cal clinging to a 17-10 lead late in the third quarter, a defensive holding call erased an interception by the Bears’ Bernard Hicks. Two plays later, Hughes appeared to pick off a Willie Tuitama pass at the goal line, only to have an official flag him for interference.

Two plays later, Arizona tailback Chris Henry scored on a 4-yard run to tie the game at 17-17. Arizona went ahead 24-17 early in the fourth quarter when cornerback Antoine Cason returned an interception 39 yards for a touchdown. Cason described his first career touchdown as the best interception of his career.

“No better feeling than that. That was the touchdown that I think pretty much won the game,” Cason said. “The defense played amazing. We can’t ask for much more than that. We won the game. A top 10 team came in, and we beat them.”

On the next series, Cal quarterback Nate Longshore hit Hawkins behind the Arizona secondary. But with no one between him and the end zone, Hawkins stumbled at about the 10 and landed at the Wildcats’ 1. Cal failed to score on two Lynch runs and an incomplete pass and settled for a 20-yard field goal by Tom Schneider.

The most painful play for Cal came on its final drive. Longshore hit Jackson for an apparent 63-yard touchdown pass with 2:18 to play. But the score was nullified by a video review, which showed that Jackson stepped out at Arizona’s 41.

“The football gods are smiling on us,” Stoops told reporters about Jackson stepping out of bounds.

Cal reached the Arizona 27 before UA linebacker Ronnie Palmer intercepted a pass with 1:32 to play. The Wildcats’ defense was strong enough and opportunistic to combat a Cal offense that averaged 36.3 points a game, tied with Oregon for most in the conference.