Arizona’s season opener against NAU at Arizona Stadium on Sept. 2 is 33 days away. To go along with the countdown to kickoff, this site will publish the Top 50 games in Wildcat football history.

WHY IT MADE THE LIST: While Oregon’s national title dream ended, hope for Mike Stoops’ career at Arizona reawakened. The Wildcats started 2-6 that season, Stoops’ fourth at Arizona, and the Wildcat fans became restless.

A three-game winning streak, culminating with this electrifying win over No. 2 Oregon at Arizona Stadium and in front of ESPN cameras, started to make people in Tucson believe in Stoops. Oregon is the highest-ranked visitor to lose at Arizona since the Wildcats knocked off No. 1 Washington on Nov. 7, 1992.

Antoine Cason returned a punt 56 yards for a touchdown and an interception 42 yards for another score as the Wildcats shook up the national title race. 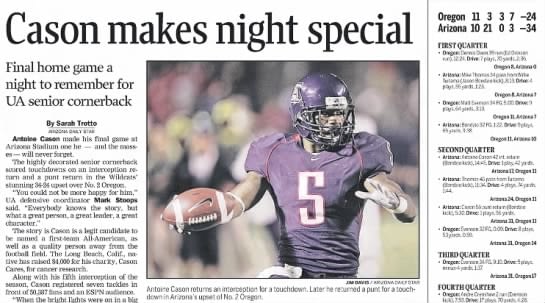 Red-clad students poured out of the stands on to the field as the Wildcats ambushed a ranked team in Arizona Stadium for the fourth straight season under Stoops — all in November.

“November has been good to us,” Stoops told reporters afterward. “It is nice to show what kind of team we have at Arizona.”

November was not kind to Stoops in the three seasons afterward and he was let go during the 2011 season before he could experience a game in the month.

“Sitting in Section 18 next to the visiting Oregon fans you could hear and feel the despair among the fans when Dennis Dixon went down with the knee injury early in the game. The game got away from the Ducks pretty soon after that and there wasn’t much said from the other side of the aisle. They just kind of accepted their fate while our side of the aisle was delirious. It seemed Arizona won a game like this each year of the Stoops era, which was exciting and frustrating at the same time in that Stoops teams showed the capability to beat the best, but could never sustain it.”

The Wildcats went 0-4 against ranked teams in November from 2008 to 2010, including a double-overtime 44-41 setback to Oregon in 2009 at Arizona Stadium. The week before that game, also in November, the Cats lost at Cal 24-16 to basically knock them out of their ever-elusive Pac-10 title hunt. They were 6-2 overall and 4-1 in the Pac-10 before the loss to the Golden Bears.

Oregon’s loss of quarterback Dennis Dixon – a Heisman Trophy candidate — to a knee injury was a heavy blow for the Ducks in the 2007 game. They never recovered in the Thursday night game televised nationally on ESPN. Dixon hurt his left knee on an option play in the first quarter. He sprained the same knee on Nov. 3 against ASU. Dixon wore a brace but he flashed his explosiveness in a 39-yard touchdown run on the game’s opening series.

Arizona quarterback Willie Tuitama completed 21 of 39 passes for 266 yards and two touchdowns, and was intercepted once. Mike Thomas caught two touchdown passes for the Wildcats.

Oregon appeared in command early with Dixon running its potent offense, which came in averaging 42.8 points, fifth in the nation. On fourth-and-3 at the Arizona 39, Dixon froze the defense with a fake to Jonathon Stewart, burst through a hole in the right side and ran untouched to the end zone. Ed Dickson ran for the 2-point conversion to put the Ducks ahead 8-0.

Arizona cut the lead to 8-7 on a 34-yard pass from Tuitama to Thomas.

Then came the play with Dixon going down to a knee injury. With older brother Ryan Leaf watching, Brady Leaf replaced Dixon and completed his first pass. But Cason intercepted Leaf’s third throw and returned it 42 yards for a touchdown to put the Wildcats ahead 17-11 early in the second quarter. That started an Arizona avalanche.

Oregon pulled within 31-24 on Andre Crenshaw’s 2-yard touchdown run with 7:53 to go in the game. But Arizona answered with an 11-play drive that ended in Jason Bondzio’s 46-yard field goal with 3:20 to go.

“I thought we did a good job in the second half of coming back after Dennis got hurt, but Arizona just played better than we did,” Stewart told reporters afterward.