Quinerly announced his decision — which came down to Arizona and Villanova — during a high school basketball “Summer of Next” showcase game on ESPNU in San Francisco.

Quinerly visited the Arizona campus in June. He did not visit UCLA and Kansas as first planned.

Quinerly is one of three point guards Miller and his staff have been recruiting out of the class of 2018, including Devon Dotson of Charlotted (N.C.) Providence Day and Quentin Grimes of The Woodlands (Texas) College Park.

It is uncertain how Quinerly’s decision affects that of Dotson and Grimes. The commitment is non-binding until Quinerly signs in November.

Arizona already has another point guard commit — Brandon Williams of Encino (Calif.) Crespi. Quinerly, 6’0″ and 165, has let it know that he can play either guard spot in college. 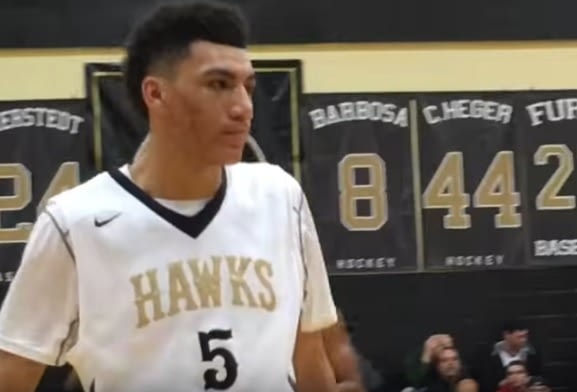 Jahvon Quinerly is a five-star point guard, the No. 16 prospect overall in the Class of 2018 as rated by Rivals. (YouTube video shot)

Grimes, who is 6’5″, can also play at the shooting guard position or on the wing. Dotson visited Arizona last week.

Miller said in a press conference today at Arizona that he will sign five to seven players before next season in the fall and spring signing periods.

Since his hire at Arizona in 2009, Miller has recruited 15 players rated as five-star prospects through the Class of 2017. That ranks only behind Kentucky’s John Calipari (35) and Duke’s Mike Krzyzewski (24).