Arizona’s season opener against NAU at Arizona Stadium on Sept. 2 is 19 days away. To go along with the countdown to kickoff, this site will publish the Top 50 games in Wildcat football history.

WHY IT MADE THE LIST: The Wildcats were ranked No. 10 in the country, with a 5-0 record overall, winning four of those games on the road to start the 1998 season. The UA did not lose a home game against UCLA in 10 years, winning by scores of 42-7 in 1989, 23-3 in 1992, 34-24 in 1994 and 35-17 in 1996 during that stretch. A look back at the 1998 season indicates that an Arizona win over third-ranked UCLA not only would have guaranteed the Wildcats an outright Pac-10 championship but also a potential spot in the Fiesta Bowl playing for the national title. 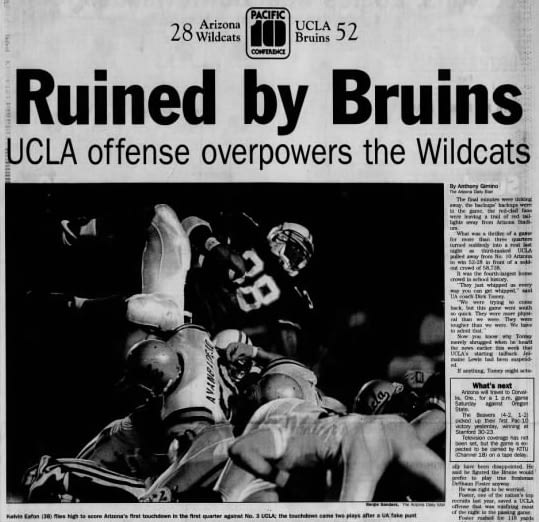 Arizona Daily Star clipping of No. 10 Arizona’s loss to No. 3 UCLA in 1998, the Wildcats’ only loss that season.

Arizona was in position for this possible scenario, leading 28-24 with 6:15 left in the third quarter. In the previous four games in Tucson, the Wildcats pulled away from the Bruins in the second half. Not this time. UCLA turned the table on the Wildcats, scoring 28 consecutive points in a devastating 6-minute, 10-second span to end their Tucson jinx and put itself in a position for the national title game.

UCLA tailbacks DeShaun Foster and Keith Brown each rushed for a pair of touchdowns. Cade McNown, off the mark much of the night, still passed for two touchdowns and ran for another as UCLA won its 14th in a row, the longest winning streak in Division I at the time after Nebraska’s 19-game streak was ended by Texas A&M earlier that day.

Foster, who rushed for 118 yards on 20 carries, had scoring runs of 1 yard and 37 yards in the first half and Brown, with 91 yards in just nine carries, scored on runs of 54 and 20 in the fourth quarter.
UCLA broke the game open with three big scoring plays early in the fourth quarter, McNown’s 64-yard pass to Danny Farmer and Brown’s scoring runs.

Arizona had its nine-game winning streak snapped. It turned out to be the Wildcats’ only loss of the season. The UA finished 12-1, its best overall record in school history. UCLA did not lose a Pac-10 game so it represented the conference in the Rose Bowl.

If UCLA wins this game at Miami, Arizona plays in its first Rose Bowl, albeit as the second-place team in the Pac-10

The Bruins had the opportunity to play in the Fiesta Bowl if it beat Miami on the road in the last regular-season game, but they were outscored 21-7 by the Hurricanes in the fourth quarter en route to a 49-45 loss. If UCLA won that game, Arizona would have represented the Pac-10 in the program’s first Rose Bowl appearance.

“We can’t let this loss bring us down,” Wildcats defensive tackle Daniel Greer told reporters after the game. “We still have dreams, things to do. This day will never come again. We will learn from our mistakes.”

The game-breaking touchdown came early in the fourth quarter when McNown executed a perfect play fake, that fooled All-American cornerback Chris McAlister, then hit wide-open Farmer over the middle on a 64-yard scoring play that put UCLA up 38-28 with 11:18 to play. It was McNown’s 50th career touchdown pass, tying Tom Ramsey’s school record.

After Arizona drove into UCLA territory, the Wildcats decided against a punt and Michael Johnson missed a 49-yard field goal, his first attempt of the season. UCLA took over on the 32 and Brown later ran 54 yards for the score that made it 45-28 with 9:33 to play. On Arizona’s next possession, Tony White intercepted Keith Smith’s pass at the Wildcats’ 20, and Brown scored on the next play to make it 52-28.

“We knew that we were the best team on the field tonight,” McNown told reporters. “We faced a very good test tonight, but we were able to answer the test. We came out of the locker room and knew that we had to make some big plays.”

The game was played in front of a sellout crowd of 58,738 – the fourth-largest ever at Arizona Stadium — and it marked the first time in seven years that two Pac-10 teams ranked in the Top 10 played each other.

“They just whipped us physically in the fourth quarter on our home field. That really hurts,” Arizona coach Dick Tomey said afterward. “The game went south so quickly and we couldn’t come back.”