Arizona’s season opener against NAU at Arizona Stadium on Sept. 2 is 16 days away. To go along with the countdown to kickoff, this site will publish the Top 50 games in Wildcat football history.

WHY IT MADE THE LIST: Top-ranked Alabama lost earlier in the day to Mississippi State 6-3, opening the door for UCLA to claim the No. 1 spot. The second-ranked Bruins, however, competed against a Wildcat team that “was wild-eyed”, UCLA coach Terry Donahue was quoted as saying in an Associated Press article.

Arizona upset the Bruins, claiming its first victory over a team ranked in the Top 10 in the program’s history.

The Wildcats, 0-14 previously against Top 10 teams, lost twice already at home that season to second-ranked teams — USC and Notre Dame. They were 0-4 in Tucson and 2-4 overall entering the game against the Bruins (6-0 overall).

“That’s the greatest upset I’ve been a part of,” first-year UA coach Larry Smith was quoted as saying by the Associated Press after the game. “The offense finally put it together with the run and pass and big play when we had to.”

“My claim to fame, as I caught the winning touchdown pass from super Frosh Tommy Tunnicliffe. UCLA safety Tom Sullivan was a bit too short to deflect the pass and All-American free safety Kenny Easley was late coming across the top tackling me in the end zone. I remember that like it was yesterday. It was the coming out party for then Freshman linebacker Ricky Hunley, who had a great game. Ricky is still my choice as the greatest ever to wear the red and blue although there have been many comparable players over the years. He was just so dominant in college.”

The Wildcat offense, which had only three touchdowns in the previous four games, got on track behind Arizona freshman quarterback Tom Tunnicliffe, only 18 and in his second collegiate start. He completed 12 of 18 passes for 217 yards and two touchdowns.

Arizona’s defense and special teams, namely junior walk-on punter Sergio Vega, provided a balanced attack that was too much for the Bruins.

UA freshman linebacker Ricky Hunley was selected the Pac-10 Defensive Player of the Week for his performance for the Wildcats. Hunley registered 14 tackles, seven unassisted, and got to UCLA quarterback Tom Ramsey for losses three times.

Vega had seven punts for a school-record 54.9-yard average. His punts, including an 80-yarder, consistently put UCLA in difficult field position.

“He kept us backed up,” Donahue noted in an Associated Press article. 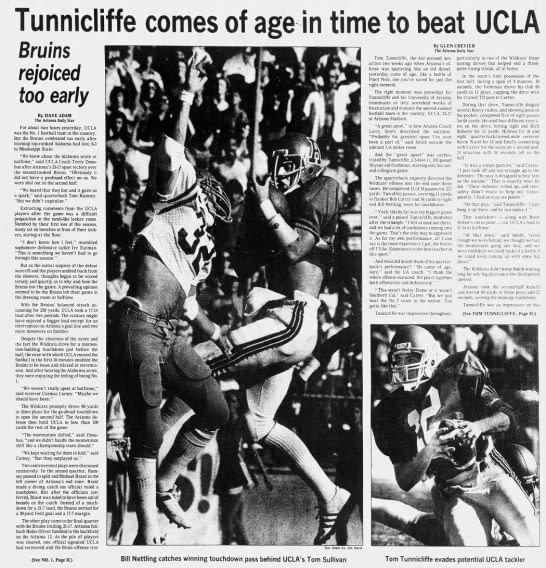 Arizona Daily Star clipping of Arizona’s upset of No. 2 UCLA in 1980 at Arizona Stadium

The Bruins were informed at halftime, when they led 17-14, of Alabama’s loss against Mississippi State earlier that day. The Bruins should not have learned of that score because what they knew probably hurt them.

Tunnicliffe drove Arizona for an immediate touchdown after halftime, hitting tight end Bill Nettling over the middle for a 39-yard touchdown connection that gave the Wildcats a 21-17 lead. Arizona never trailed again thanks to a stifling defense.

Smith changed Arizona’s defensive formation before the game, which he told the Associated Press, “amounts to an overshifted 4-3 (formation).”

“We used three linebackers in addition to the noseguard, and I think that confused them,” Smith said.

“UCLA was ranked No. 2, and Alabama was No. 1. Alabama lost before the UA-UCLA game ended, but UA decided not to announce the score to the fans for fear that UCLA might get inspired and rally for the win. The other thing was the amazing kicking effort of punter Sergio Vega that day. Vega, from Pueblo High School, kept pinning UCLA deep in its territory with his booming kicks. The next year, during UCLA coach Terry Donahue’s conference call with the Tucson media, Donahue asked: ‘Is that punter back?'”

Sacks by Hunley on third down plays in the third quarter and fourth quarter stalled UCLA drives. Greene knocked down two Ramsey passes in the fourth quarter, including one that prevented a touchdown. With less than two minutes left, Robinson sacked Ramsey in the end zone for a safety and the final victory margin.

UCLA had the ball one last time but a desperation pass into the end zone by Ramsey from the Arizona 46 was picked off by Liggins as time expired.

Smith was in his first year, replacing Tony Mason after Mason coached the Wildcats to the 1979 Fiesta Bowl, which it lost to Pitt 16-10. Mason’s job was terminated in April 1980 following a series of investigated reports by The Arizona Daily Star and Tucson Citizen which alleged Mason and some of his assistants were involved in irregularities in recruiting and expense-account practices.

The standing “A” red helmet pictured was only used in 1980, a departure from the running “A” red helmet used by Mason. You can get a closer look at Arizona’s red uniforms and helmet in this YouTube video showing USC’s 27-10 win over Arizona three weeks before the Wildcats’ upset of UCLA.